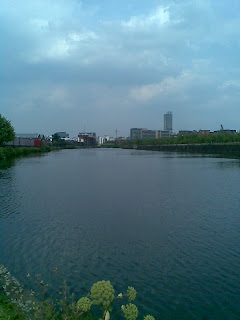 This evening I met Phil and Nick, for a session on the Manchester Ship Canal. I had taken a walk along the canal earlier in the week and had my appetite whetted by the large numbers of fish i had seen topping and rolling.
The canal is very deep with 13 ft depth only 1 rod length out. I opted to fish the stick float, Phil opted for a feeder approach and Nick tried floating bread crust.
We started to fish at about 5pm and it wasnt until 7pm that we started to catch on a regular basis.
We caught roach, small chub and Phil even had a brown trout – INCREDIBLE!!!!
Whilst i was aware that the water quality in the canal had improved to the extent that it supported a coarse fish population, i would never have believed that it had sufficient oxygen content to support a trout population.
Unfortunately the fish slipped out of Phils hands just as i was about to take a photo so sadly we have no pictoral record of this event.
Photo or not, it was an event that will surely remain in our memories for years to come.
Most of the fish we caught this evening were laughably small, but there were larger fish in the vicinity as we could see them rolling and topping. As with fishing any new venue it takes a little time before you discover which methods work best. I constantly re-arranged the shotting pattern beneath the lignum stick i was using and constantly changed the depth at which i was fishing to see where most bites came from. It wasnt until 7pm that the fished really switched on, again this is an unknown variable, do the fish feed best at dusk, or did it take them that long to find our feed? i suspect the former.
It was good fun fishing with company this evening, and i hope the guys come again as together we will be able to work out the best methods and baits much quicker.

This is a photo of Phil dropping the prize catch – half a second earlier and it would have been a photo to remember! 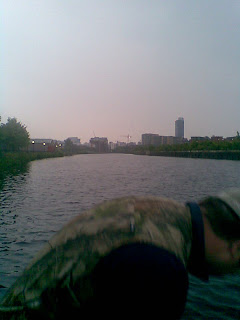