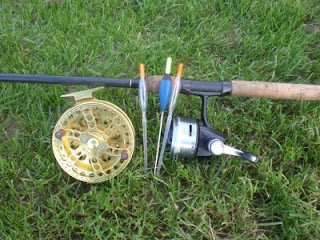 I spent Saturday on the Ribble fishing for Grayling using stick float, pin and maggots. Despite battling a strong gusty upstream wind which made fishing difficult at times i managed to catch a good few grayling. None of which were a remarkable size, but all of which were remarkably beautifull in colour.
My intial intention was to fish a nice shingle drop off, which i managed without incident, picking up about half a dozen fish, and then to move down stream fishing various swims for about 45 minutes each before moving on. However the wind was so strong that i chickened out and sought refuge in a sheltered area of the river in some woods hoping to catch one of the big chub which reside there. I only caught a few small 2oz grayling and trout for the rest of the morning and called it a day early in the afternoon. I timed it right as the heavens opened just as i got back to the car. 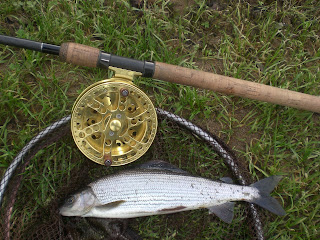 I have spent many hours on the banks of the Ribble this season, all of them very enjoyable. The water is much cleaner than in my local rivers, resulting in a much higher level of aquatic bug life, which in turn leads to better fishing. My local river contains trout (which i am scared to eat) and much lower numbers of fish such as dace and barbel which need really clean water in which to thrive, and there are no migratory fish or grayling. However now that the water authorities are making significant improvements to drainage and sewage disposal systems in my local water catchment area, i can only see the fishing improving.

Today was a typical autumnal day in Manchester – freezing cold, blustery winds and the odd heavy shower thrown in for good measure. Not a day for fishing. However, by mid afternoon cabin fever had set in, so i pick up some tackle and headed off down to the Manchester Ship Canal to see if i could locate some roach. I only lasted 30 biteless minutes as the wind was just too strong to fish in. Seeking some shelter i moved a few hundred yards to Salford Quays and fished one of the small quays with the wind at my back. Despite the cold, the perch in the quays are very obliging and i caught about 10 brightly coloured stripies in about 45 minutes. A smattering of raindrops quickly turned into a deluge of biblical proportions which saw me giving up and heading back to the car. By the time i’d packed away my gear, the rain had stopped but by now i was soaked and decided to call it a day.