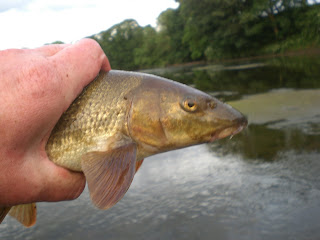 For daft anglers such as myself, I have to admit to looking forwards moreto June the 16th than I do Christmas day. Christmas is a family affair, expensive, noisy and frequently stressful. For purely selfish reasons i prefer the 16th of June – the first day during the summer that I can go coarse fishing on my local rivers. A day of calm peace and quiet – away from children, family and the trappings of modern life. The long drawn out evenings of June are a special time to fish on the river as the sea trout are now beginning to move in numbers and their crashing and splashing add to the feeling of being one with nature.

After spending the last few weekends gardening, the sense of anticipation i felt whilst packing my fishing bag and taking the rods out of my shed made me tingle. I had spent all morning and the early part of the afternoon working in the office, but i have to admit to my mind being elsewhere.
June the 16th last year was my first trip to Tonys favourite stretch of the Ribble. His kind generosity in sharing some of the rivers secrets with us – led to a bumper catch of Chub and Barbel.
Despite having plently of choice of venue we decided to head back to this special 200yds of river.
Tony had the good fortune of hooking a clonking big barbel on his first cast of the season. He played the fish for a good ten minutes before the crafty devil dragged his 7lb hooklength over some sharp rocks and parted his line like cotton. This led us to believe that we might be in for another red letter day
This year there were fewer barbel feeding, but we were compensated by catching lots of decent dace, trout, sea trout, chub and eels.
Undeterred we fished the run for the rest of the evening, Tony taking a nice Barbel of about 6/7lbs plus a great sea trout of a couple of pounds.
After last years experience in this swim, I set up with much heavier gear than Tony, using a big 3gramme avon float and an avon rod instead of my usual lighter stick floats and drennan floatmaster trotting rod.
Rather than fish the main run, i mooched about a few hundred yards upstream searching out the faster shallower gravel runs, but couldnt catch anything other than chub and dace. It was only when i moved back into the main run as dusk was beginning to fall that i felt something more solid and a little two pound barbel finished off another opening day to remember.
The fishing wasnt as prolific as last season, but the sense of peace and sheer enjoyment was burning as brightly as ever. Very little can surpass a long evening on a beautiful river with a like minded friend.