I spent a great day fishing with Neil (aka Miggy). After a week or so without fishing i was itching to get out again and an agreed 8am start saw us on the banks of Square Pit in Hindley. I have fished this small lodge before with Tony and caught some lovely Rudd and Crucian Carp, its a cracking little venue and i was really pleased to be wetting a line there again.
I decided to use different tactics from my previous visit, where i had alot of success using maggot as hookbait over swim stim green groundbait. Today i decided to feed two swims, the first in the margins with a hemp feed and sweetcorn as hookbait, the second line was 4mm pellet feed with 6mm green stim pellets as hookbait.
Neither line worked well and i only had a couple of roach by lunchtime. Meanwhile Neil seemed to be catching every fish in the lake using red maggots. 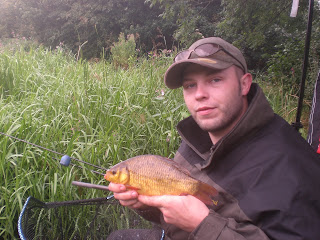 I needed a radical change of plan, as neither plan A or B were giving me any fish. I decided that i would drive to the local tackle shop to buy some casters would be the answer, but they didnt have any, so i bought some maggots and returned to the lake.
First put in gave me a rudd of about 6oz and i went on to catch nearly a fish a chuck for the rest of the afternoon. The hemp i had fed brought me a better quality of roach and i had a few pushing the pound mark – not bad for a small venue.
I was also lucky enough to catch half a dozen crucians to about a pound and lots of rudd.
The rain was atrocious with incessant rain but i was happy to be back on the bank and catching fish again.
Matthew has sailing club on Tuesday evening and is taken there by his grandmother, however she had other commitments this evening so it was my pleasure to accompany him to Hollingworth Lake for a few hours this evening. Matt sailed whilst Neil and i had a short lure session in the hope of catching one of the lakes reputed monster pike.
I caught this little jack on an ondex lure, and Neil had a good take from a fish towards the end of the evening on a traditional mepps style spinner later on. We had a good laugh standing together fishing off the dam wall, and i dont know who was more suprised , me to catch a fish or the little jack pike who miscalculated what to eat for its dinner. 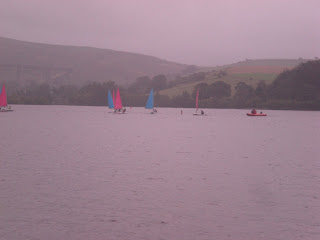 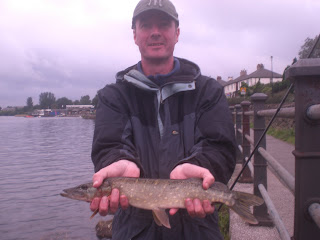 All in all, a long but very enjoyable day.
manchester fishing Irwell Ribble Trout