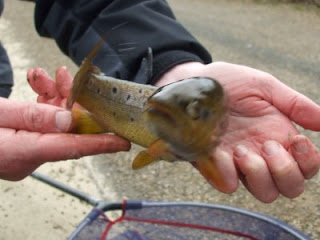 After spending a tough day on the Irwell I was in the mind to put a bend in my rod this afternoon. After umming and aarring about which commercial venue to fish i finally decided to visit Tonys little stream. The water was low and clear and walking along the footpath i could see trout in various lies and a couple of shoals of roach.
I settled down in a swim with a shoal of at least 50 fish ranging in size from a couple of ounces to larger specimens well over a pound and so narrow that i could poke the far bank with my rod tip! A strong down stream wind gave a good surface ripple but also made presentation awkward (a light set up is neccessary for the shy biting roach in this stream).
First run through with caster as hookbait gave me a brown trout of about 12oz . Next run through saw a gust of wind lift my tackle out of the water and into the bushes of the far bank.
A new hooklength later and i had a nice little roach of about 4 oz. I caught about 4 or 5 more little roach and then Tony turned up.
His face was a picture when the wind dropped for a moment and he saw the number of big roach in the swim. I told him that all i could get were the little ones but i dont think he really believed that we couldnt catch their bigger friends. We trotted a variety of lines, up in the water, well over depth, laying on but couldnt get the fish to take the bait on a regular basis. At one point we were laying on using a piece of worm and again out of nowhere we caught a nice brownie of about a pound.
As the afternoon progressed the roach became more and more wary, getting bites became virtually impossible. The shoal of fish parted like the Israelites crossing the Red Sea everytime we ran a bait through. This prompted me to change down to a 0.06 hooklength (120z) and even this wasnt enough to make a difference. Whoever says fish have bad eyesight needs glasses – as we could see the fish looking at our hook bait of caster (hook well buried in the caster) with the lightest hooklength i ever use and still turning their noses up at it.
At one stage in the afternoon i hooked into a ball of weed and old fishing line. There was loads of shrimps, water louse and caddis in there so we tried to use them as hookbaits. To get the caddis larvae we had to poke them out of their little homes with a little twig and were amazed at their size (i will try to tie some of these up as flys for the new trout season). Even these natural foodstuffs didnt work as bait as the roach studiously ignored anything we put on the menu. 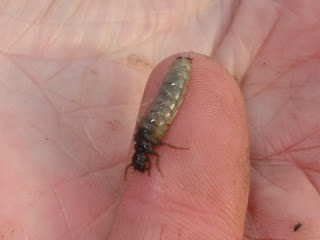 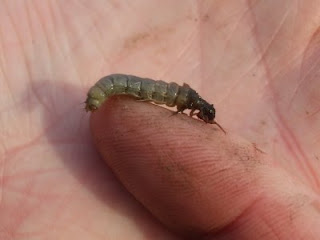 Like a bushtucker trial!
I eventually gave up in frustration and moved upstream back towards the carpark where i had earlier seen a smaller shoal of roach. Again my hookbait was travelling through a shoal of good fish but they didnt want to know. A change of hookbait to maggot brought me a few small roach but the specimen fish proved too canny for me today. 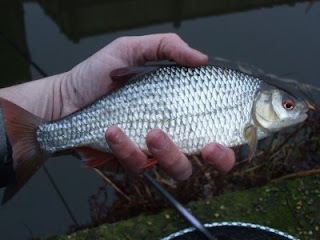 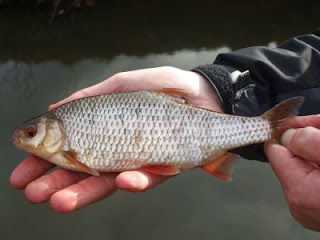 Despite our frustration at not bagging up its impossible to complain when you catch redfins as beautiful as these.
manchester fishing Irwell Ribble Trout