Now that the nights have drawn in, and the weather not conducive to pleasurable fishing, i think thats its a natural progression for me to learn to tie my own flies. This past season Tony has been incredibly kind with the donation of his time, effort and materials, donating many tiny works of art to me, but i have slowly but surely become embarassed by his generousity especially as i lose the majority of them in the trees.
Three weeks ago, Phil-K invited me to accompany him to Bolton Fly Tying Club who were having a guest tyer giving a tying demonstration. It was a great evening, and it convinced me that its now or never. I had already taken a look at a beginners website www.learnflytying.co.uk and decided that i would start off with a few of the beginner patterns from the beginners video demonstrations.
Tony donated an old vice, and i bought some fluff and stuff from www.flytek.co.uk
Despite only fishing buzzers very occaisionally they seem to be the easiest fly to start off with. These four took me an hour, they might be scruffy but i will see if they work later this week. 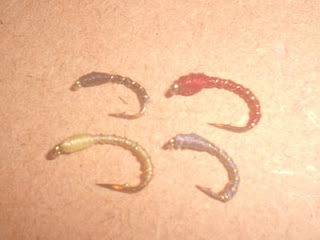