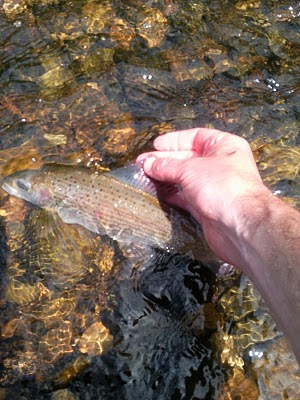 As the housekeeper had to work last Saturday I had a rare day to myself. Phil and Tony have been pulling away from me in the number of species they have caught from “the list” so i decided that Saturday would be a suitable day to fish a couple of venues and get myself back in the running.
So 7.30am saw me tackling up on the banks of the River Dane with my usual river set up of light wire stemmed stick float (8xNo4) and a closed face reel (the flow is too slow to send the pin round whilst the rivers are so low). I’ve only fished the Dane once before with Phil in the depths of winter, when we both blanked but i remembered his advice as to which swims held fish, and was rewarded with a nice little grayling first run down.
The fishing, the scenery, the solitude and the weather were all fantastic – I’d forgotten how much I enjoy fishing alone (dream time) and I caught a steady stream of Dace and Grayling all morning.
My original intentions for the day were to spend a few hours on the Dane to catch a couple of Grayling, then head up to Deep Pit or Square Lodge to knock a Crucian Carp off the list followed by an evening on the Ribble trying for a sea trout. However, a quick call from Tony who expressed a wish to try out some new water on the River Severn saw me meeting up with the boys and heading off down the M6 towards Shrewsbury.
As it turned out I didn’t fare so well on the Severn, all I managed was a small trout, a couple of Salmon Parr and a number of small dace. Phil also struggled, but Tony found some good chub in a faster run of water, the best going to just over 5lbs. It was a lovely fish in mint condition. Its always good to try out somewhere new, and despite not catching very much I will certainly return. You can often visit a fishery many times before you begin to unlock its secrets. It would be churlish to complain about a lack of angling success when I’ve had the opportunity to spend an afternoon on a beautiful river bank with two good friends. 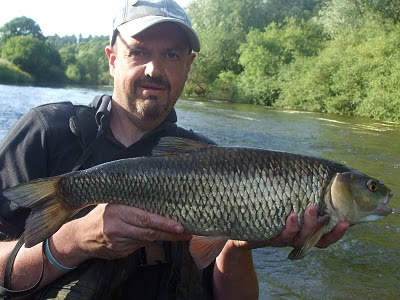 The list started off as a bit of fun, but it seems as though we all have a little competitive streak in us. For once in my life i was pleased to catch a minnow, as this little tiddler put me one ahead of Phil and a little closer to Tony. 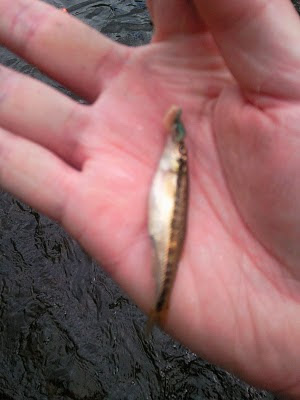 During the summer Matthews rugby team still train every Tuesday evening, and I usually spend the evening running the perimeter of the pitches attempting to halt advancing middle aged spread. This evening, a bad back prevented me from jogging my 5 circuits of the training fields, but didn’t prevent me from taking my lure fishing gear to the lake which borders the training ground. Two jack pike of a pound or two each were my reward and now take me up to 18 species for the year so far. 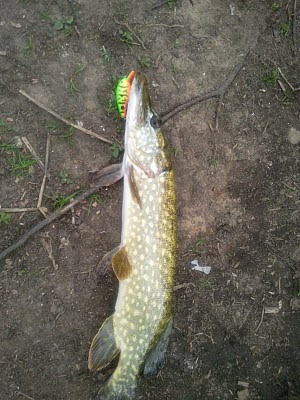 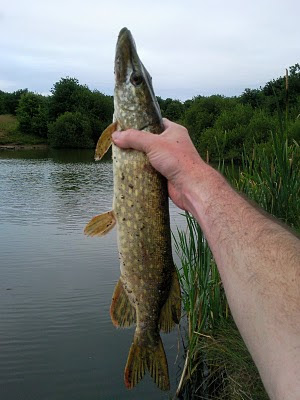