There’s been a lot going on at Fishing Fiend Towers recently – a new son Tommy 6lb7oz and the other Tommy (aged 76) in the family being hospitalised for the last month. So with yours truly being both a dutiful father and son, fishing time has been non existent recently.
A weeks “paternity fishing” was wrecked by the incessant rain – with river levels not being conducive to good sport. So with a return to full time working hours beckoning – today was my last chance for a bit of bank time.
I’d promised Paul S ages ago that I would accompany him to a fishery of his choice – and he chose Ginghams near Horwich. To be honest, I’d never heard of the place before – but hey ho I’ve been desperate to get out fishing for ages now so despite yet another rotten weather forcast I gave it a go.

Heres a link to the fishery – http://www.ginghamfisheries.co.uk

Set on the slopes of Winter Hill – its very picturesque. 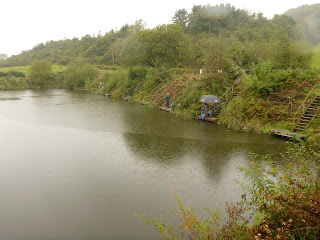 The banks of the fishery are very steep, and the water quickly drops away to 10ft only a couple of meters out, so i fished top 2 plus three pole sections, corn as hookbait over a bed of hemp.
Peg 7 – my home for the day 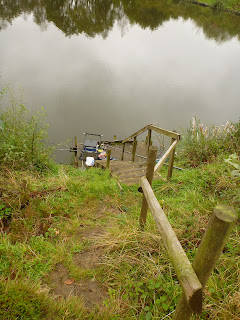 I had a couple of roach and skimmers early on, and then had a run of 4 smallish mirror carp to about 4lbs.
Great fun to watch the 16’s elastic stretch out with the fish being able to run in the open water. Then to stop things getting absurd – the pulla bung did its job as the fish came quickly to the net once tired (I’ve recently re-elasticated all my top kits – so the laccie is still a little slack allowing the fish to give a good stretch on 16s) 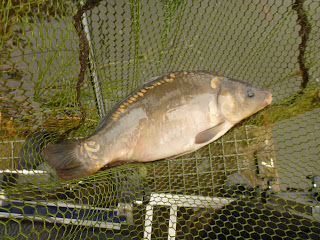 As the morning progressed the weather turned, and the forecast wind and rain arrived – at the same time as the bailiff – £4 – not bad for a commie.

I had a few more fish – (all carp) but they seemed to arrive a couple at a time – then nothing for a while. It was only when i added a few pellets to the hemp i was feeding that the fish arrived and stayed. 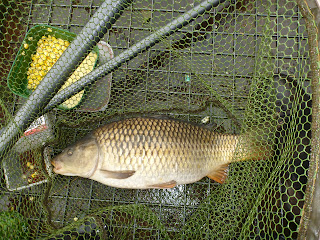 The last half hour saw a run of 6 fish in 6 put ins – with the float burying nearly as soon as it had settled. The effect of getting the feeding right made such a massive difference with the last fish being nearly double the size of anything I’d had earlier in the day.

Paul S, had a similar day – catching carp intermittently on pellet waggler, as did his friend also conveniently named Paul, and Luke who also tagged along with us – did very well on method feeder catching a good stamp of skimmers regularly throughout the day.

So would i go back to Ginghams  – absolutely – I think I’ll organise a club match on here sometime between now and the end of November – It will give me something to look forwards to in the midst of all the sleepless nights and dirty nappies.