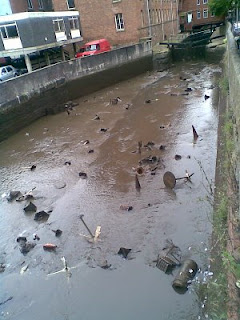 On the way to a meeting in town today, i was walking alongside the Rochdale Canal which runs through the city centre, and saw a British Waterways team attempting to remove debris from around the propeller of a narrow boat. In order to get access to the propellers of the boat they had lowered the level of water in a couple of the lock basins.
As expected the canal bed was full of rubbish, but amongst the rubbish i could see small bream, chub to about 4lbs, roach to over pound and more than a few jack pike. I was amazed at the sight of these huge chub, and maybe one day during the autumn i might have a couple of sessions trying to land one of them. They would definately be personal best chub if i were lucky enough to hook into one of these lunkers.
My work was done by about 3pm. and as the sun was out for a change i bought a pint of maggots and went down to the length of river which runs behind my house. Its the first time in ages i have fished this part of the river despite it being closest to home, and i tried out a swim i have never fished before, as its only this season that i have owned a pair of waders, rendering this swim previously unfishable.
I havnt taken any pictures of this swim, but promise to do so in the future, but it consists of a large shingle bank on the near bank shelving gently away to a deep run on the far bank. I could wade 3/4 of the way across and i ran my stick float through the faster deeper water. I caught a few nice roach in the first half hour, then a couple of small trout.
One of the trout had an unusal silver-blue-purple sheen similar to those we caught earlier in the season higher up the river. If i were on the Ribble i would swear they are sea trout but my local river is inaccessible to migratory fish so i can only assume they are brown trout which under normal conditions would migrate to sea given the opportunity. 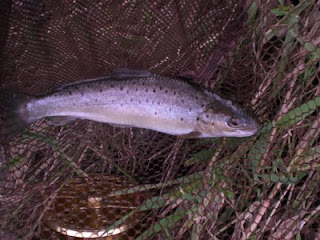 I caught a steady succession of roach and trout throughout the session, but surprisingly no chub. However, as the light started to fail, i hooked into a real lunker of a fish which hooped my rod right over. The fish was on for a good 10 minutes before shedding the hook, and i never got to see what it was. It didnt fight like a trout, was too big for a roach, and fought too hard to be a chub – i do have an idea what it was and was gutted to lose it just as it was getting close enough for me to see it. I will certainly be fishing this swim in future in the hope of giving some of you a real surprise.
manchester fishing Irwell Ribble Trout