I had wanted to go fishing with my Dad ever since I was old enough to realise he was out doing something enjoyable and that I was going to be left stuck at home with my mum. Memories of my father going out every evening to catch trout from hill lochs in Donegal during family holidays are etched into my memory. Even more so, the wild brown trout which we used to eat for breakfast. I knew how to gut a fish before i had even caught one.
So faced with a son eager to carry on family fishing traditions and a barrage of nagging, my dad was forced into promising me a rod for my 7th birthday. It took a few years, many tangles and blank trips before I could competently handle my 7ft Shakespeare spinning rod and Ambidex reel. I can remember trips to Hollingworth Lake, Ogden Res, and even the lake that was to become the Pennine Trout Fishery (which was a great, big perch venue) as though they took place yesterday. Happy days.

Back in the 70’s the Rochdale Canal, was closed to boat traffic and in a state of general disrepair. The absence of boat traffic led to the water being gin clear, and a great place to stalk fish. Specimen pike, bream, perch and roach were all visible with the naked eye to anyone who took the care to look for them. It was also only a fifteen minute drive from home.
It was during one of our regular Sunday afternoon fishing trips to the canal whilst my dad was lure fishing for jack pike that I saw a huge roach swim out from the cover of a bush which was growing out of the side wall of the canal. This thing was so huge to my young eyes and was the biggest fish i had ever seen in the canal. I was so in awe that i didn’t even to try to catch it – just watching it swim by was such an amazing experience.
After that Sunday afternoon, “the bush” was the only place I ever wanted to fish, and I was rewarded by seeing the fish nearly every visit. Obviously being a keen angler – one thing led to another and I started to dream about catching the biggest roach I’d ever seen. The only problem was that the fish ignored all my crudely presented baits as it swam in and out of its bushy cover.
With most problems, if you spend enough time thinking about them you come up with as solution, and my solution lay in my grandmothers vegetable garden. One Sunday morning she awoke to find her runner beans collapsed on the ground, and I had a few new bamboo poles to count in my fishing tackle armoury.
My plan was simply to have more hooks in the water.
So that afternoon armed with my new gear I lightly fed maggots around the base of the bush under which my roach lived, cast in my three lines, sat back and waited. It only took an hour or so before one of the floats attached to a runner bean cane slid under and the roach charged into the cover of the bush and with little or no give in the cane dropped the bait as it fled.
The next Sunday using exactly the same tactics, I was luckier and the roach picked up the bronze maggot attached to my little spinning rod and after a short while I banked the biggest fish of my short fishing career. Maybe this fish has grown in size in my memory over the years, but my dad even today maintains that that fish was well over 2lbs, and the largest roach he had ever seen.
A consequence of this early success was that I decided that if I was going to be a proper fisherman, then I would need a proper fishing rod. A £12 14ft fibre glass job for my twelfth birthday did the trick and I soon became a regular on Heaton Park boating lake.
In those days the Heaton Park boating lake was a cracking venue holding big roach, gudgeon, perch, tench and crucians. Like all the other youngsters, I used to always set up next to the inlet stream near the boat landing stages. Using maggots, it was always possible to catch a few dozen fish every trip, though we rarely caught anything of any size. All this changed one day when a family came and stood near us feeding a carrier bag full of old bread to the ducks. For some reason, one of the boys I was fishing with decided to put some of the bread from his lunch onto the hook and cast it into the lake where five minutes previously the ducks and geese had been eating their free lunch.
Well, you don’t need to be Einstein to guess what happened next. This lad caught a massive roach, followed by another. Wanting to get in on the act – my lunch was also sacrificed on the altar of the roach gods, and my second ever 2lb+ roach was banked. I’m sure many of you remember those old Samson spring balance scales which we used to use – well after our chance discovery of bread flake fishing these scales became the “must have” kit amongst all the young regulars on the boating lake, and we all caught many fish over 2lbs. However 2lb seemed to be the limit as I cant remember anything bigger than 3 or 4oz over the magic weight.

You may wonder what has brought about this rambling post about my childhood roach fishing exploits?

Well today I visited Pool Bridge Farm near York to have a crafty practice session before this years Maggot Drowners Xmas Fur & Feather fishing match. And surprise surprise I caught my first two pound roach in well over 20 years.

Fishing from peg 29 on the Horseshoe lake using hemp and caster I caught a succession of small roach and perch, along with a big brown goldfish/crucian and some nice skimmers. Then quite unexpectedly my float dipped a fraction and I lifted into what I at first thought was a carp or tench but then quite delightfully turned out to be a clonking 2lb roach. A very early morning start – resulted in me leaving my landing net and also my scales at home, so using a borrowed landing net and using Cleggys (the Fur & Feather organiser)scales I’ve banked my best coarse fish in ages. 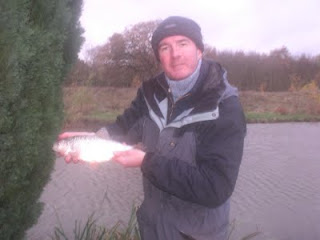 Not the best picture – hopefully someone will be emailing me another one which i can post. 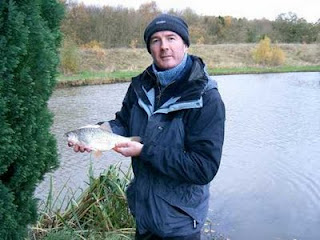