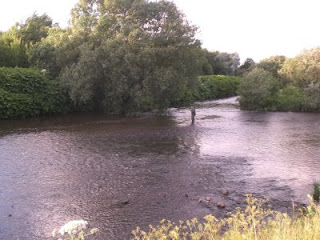 I spent my first evening session of the season on one of my favourite lengths of the Irwell. As i knew Big Dave was coming i chose to fish the swim nearest to the car park. This proved to be a mistake as it only produced three minnows in an hours fishing.

Tony also came down to fish this evening, and he chose to fish one of the shallower swims behind the island. He only stayed for an hour as he wasnt feeling great but still managed to catch a couple of small chub.

After getting fed up of the first swim i moved 500yds up river to a swim i have enjoyed some success in before. I wasnt to be disapointed this time as during the next few hours i caught a succession of chub, roach, gudgeon and minnows. I love fishing at this time of the year as the twilight seems to last for ever, and this evening i was still fishing at 10.30!!!
Even though i didnt catch any of the bigger chub which inhabit this length of river, by feeding constantly i was getting bites and fish on a regular basis. I only had maggots as bait this evening so didnt have anything to bypass the smaller fish. I will be coming back to this swim in the next couple of weeks armed with hemp, caster and worm to see if i cant tempt some of the lunkers that were splashing about as night was falling. 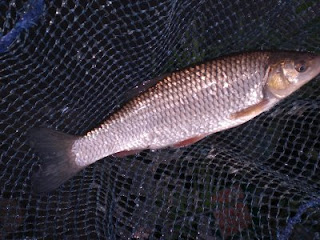 An 8oz chub was my biggest fish of the session, but quantity compensated me for lack of quality.