My original intention was to fish on the Ribble this afternoon, but Tony persuaded me to change my plans and to fish on a still water instead. The information we had was that the Ribble was in flood and highly coloured so it was probably a good idea to leave it alone for a few more days. Tony fancied taking a look at the reservoir i fished yesterday so a return trip to the Oldham Moors arranged.
I looked forwards to showing Tony this bit of water and after yesterdays essox activity i took appropriate tackle with me.
As i half expected i could see a Pike in my swim as soon as we arrived on the bank. Tony set up his fly rod and tied on one of his new home tied pike flys to see if he could get the fish to take. However after taking a long hard look at Tonys lure the fish backed away and slowly slid into the depths.
We set up our standard tip gear, with maggot as hookbait and swim feeders loaded with bread feed. I caught 4 roach with my first 4 casts, and after the last 2 of these were taken by Pike as i released them back into the lake i decided to get out my Pike tackle. As i was setting up, Tony had a roach snatched by another Pike further out into the lake, after a short time the Pike released its hold on Tonys roach, and a very damaged, bedraggled roach was landed, and set up on my trebles.
I cast in only 4 yards from the shore, and within 30 seconds it was taken by the Pike shown in the photo below. 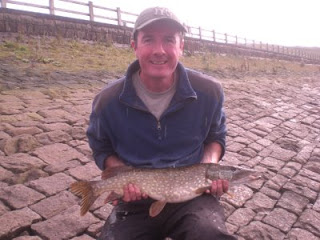 It didnt put up much of a fight as it had a great big pot belly (probably from all the roach it had eaten recently).
We carried on catching roach on the tip, Tony even caught a Ruffe, a species of fish i havnt caught for many years. An hour or so later, Tony saw yet another Pike lurking in the margins, waiting to pounce on fish which we were releasing back into the lake. Again a roach was mounted on the trebles and within 3 minutes or so of casting in, took the bait. This fish fought much harder, making repeated runs, and spectacular surging runs on the surface of the lake. The size 10 trebles held neatly in the scissors of the fishes jaw and this lovely fish graced the bottom of my landing net. I was chuffed at catching this one as its definately my best Pike for quite a few years. 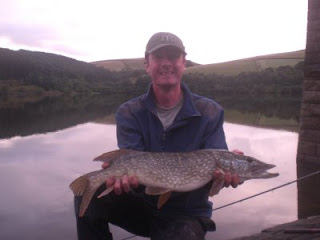 In exactly the same manner as yesterday, the bites slowly dried up on the tip, and black clouds closed in. We packed up quickly but couldnt beat the rain. Hopefully the river will have returned to fishable levels by Tuesday afternoon, as Tony said after we had packed up “its a nice change fishing still water but you cant beat the magic of the river”. I couldnt agree more.
manchester fishing Irwell Ribble Trout