Despite the recent bad weather I’ve taken every opportunity I can to get out fishing again.

My species hunt is progressing quite well, and  I’ve been going out on a few sea fishing trips with Phil, and a couple of freshwater trips with the kids has seen me racking up quite a few more species.

After a nice chat about local fishing spots with my friend and master float maker Mike Cootes (who also has an excellent blog called Purple Peanut – click to read it) I was given heads up about a lake thats less than 20 minutes from home where I’ve never fished before… a small pond behind a factory, that Mike said was ideal for kids.

So Phil and I headed out one evening to have a look see — Phil with a pint of maggots …. Me with a tub of lovely lovely worm, my 13ft Drennan float rod, centre pin and a selection of Mikes lovely floats.

Mike had told us that on a previous trip he had caught roach, rudd, perch, skimmers, crucian carp and tench … so we were quite looking forwards to trying out this new North Manchester venue. I set up fishing in a corner of the lake that was fringed with reed, and small lily pads, with a depth of four and half feet…. I set up my float rig about 3 inches over depth to get the worm bait hard on the bottom with the hope of a nice tench, and anything else that was interested. A small piece of worm section as bait with a size 16 micro-barbed hook, with plenty of chopped worm as a form of ground bait.

After the first half our of nothing but perch, the over feeding of the swim started to pay off. Once I hooked my first small roach, the perch disappeared and I spent the next hour catching small roach and rudd, and then a few nice skimmer bream.

Then, as we were getting towards 8pm and light levels were starting to drop the float slid away and I hooked into something a little more solid. I was rewarded by this wonderful little Crucian Carp — my first of the year and another entry onto my species list.

And then, back to the roach — but they had started to get a bit bigger, with a few fish pushing the 12oz mark.

And then, the float slid, I lifted into a fish, and my rod tip hooped over as a solid strong fish gave me the run around through the marginal reeds and lilies…. I had a hunch that it was a tench…. and after what felt like a couple of minutes (but probably a lot less than that) a lovely tench graced the net.

I was thrilled. As the light started dropping as the evening drew to a close, we changed tactics and fished up in the water, spraying maggots and watching good roach swirl and pick up the baits less than 12 inches below the surface. We had a few more roach nudging the pound mark – but they didn’t photograph well with the flash of our cameras in the growing gloom.

I was delighted with the discovery of this little lake, my first ever visit despite its proximity to home. It just goes to show how theres always a surprise near to home if you are prepared to give small venues a try.

It was so good, I took one of my two little apprentices back the next day for an hours entertainment. I can’t think of a better venue to take kids for an hours fun.

I’m now up to 19 species for the year to date , as during the sessions on this little lake, I caught Perch, Crucian Carp, and Tench.

It’s great to be out fishing again after lock down ruined the spring. As you can imagine .. there are plenty more sessions and write ups on the way.

Life sometimes takes over, and I don’t have as much time or inclination to write about my fishing trips as much I used to… that doesn’t mean to say I’m not going fishing anymore… I most certainly am … just in a slightly different manner than I used to before.

Most of my fishing over the last 6 months has been with family and friends, fitting in with others plans etc… And having a lovely young family I’ve no doubts that these demands on my will continue into the future… work, family life, kids football practice and regular Saturday morning matches, running and other family stuff is limiting my time on the bank.

In July – I organised a little fish-in on one of my favourite sections of the River Irwell – the river fished well for those who took part – with nearly everyone catching small roach, dace and chublets, and I had a couple of nice trout too – all on trotted stick float maggot.

Towards the end of July, I joined in the celebrations of my mothers 80th Birthday at the Low Wood Hotel at Windermere in the Lake District…. again family time as in the ascendancy but i did manage to have a few casts of the lure rod off the end of the pier outside the hotel, and managed to hook into a perch nearly every other cast. Nothing huge, with the fish all in the 6 to 8oz bracket. 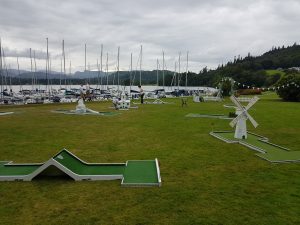 My next trip out was entirely different – at the start of August I had an odd day at work, a mornings meeting in Crewe followed by an evening meeting in Liverpool… so naturally I filled in the gap with a little cheeky session on the Shropshire Union Canal at Audlem… I’d never visited this bit of canal before.. I just had a look on google map and thought I’ll try there….

So i pulled up in the car park of the Bridge Inn, Audlem – payed for a few hours parking and had a nice session using hemp and corn. Sadly there was plenty of boat traffic but happily the roach were obliging – and I managed to catch a dozen or so decent fish up to about 12oz.

I packed up after a few hours – some great roach fishing from a new spot for me.

Next up was a long weekend with the family to Holyhead in North Wales.. I only managed a single sort session at the Trearddur Bay flag pole. Using the remnants of a tub of denrobena worms, I set up a simple two hook paternoster rig and cast out into the bay. I was amazed by the results, school bass, pollack and about 3 or 4 species of little wrasse. It was a bite a chuck and I was smashed up twice!. I’d never considered using garden worms before for sea fishing but its quite obvious that the fish don’t mind

Alas family commitments that weekend only allowed for a single short session – I fully intend to come back to this spot next summer with a slightly beefier set up and see if I can hook into the much bigger fish that were smashing me up.

So October half term was spent on a Caravan Break to Devon Cliffs Holiday Park in Devon. As my in-laws were joining us I had free reign to do a bit more fishing. The  weather was terrible for most of the time we were there but I managed a couple of good sessions. A nice afternoon on the beach at Budleigh Salterton on lures we caught some mackerel and garfish.

Next up was a day trip to Brixham.. and ” I was amazed to find boats offering mackerel trips” lol.. which i suggested to my wife that the kids might like….

Just like a well baited swim and well presented bait… she took it hook line and sinker … so an afternoons mackerel bashing ensued..

I was delighted to catch my first ever pilchard ! – an added bonus 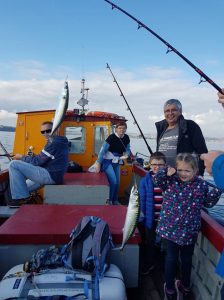 Using the mackerel we caught – I then had a few sessions fishing into the night off the beach at Budleigh Salterton again…. Using my two 15 foot surf casters, and 2 hook flapper rigs I banged out strips of mackerel into the distance and sat back and waiting to see if anything was biting.

It took about 30 seconds before my rod tips began to rattle, I thought it was crabs at first as the bites were just little rattles rather than more powerful pulls on the rod tips. I soon realised that Budleigh Salterton after dark is Pout city as I caught dozens of the cheeky little bait robbers. I soon gave up using 2 rods as the bites were just too frequent, and I was getting double hookups nearly every cast. And then eventually got fed up of catching Pout themselves, so rigged up a pulley rig with a dead pout on the end to see if could catch anything bigger 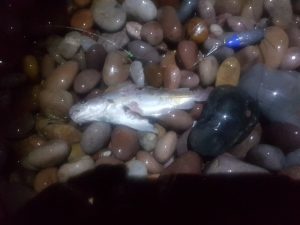 And it didnt take long to get a really positive pull on the rod tip.   The culprit was of course a bloody dog fish…. not a bad one… but it signaled time to pack up and go home. That was the end of my fishing for this trip

I then managed a few sessions on the Fylde coast at Rossall with my mate Phil, but sea conditions and tides weren’t in our favour and we didn’t catch very much apart from some 3 bearded rockling and a couple of dabs and plaice.

And I finished the year by having a few sessions on Drinkwater Park Lake, but despite using a variety of lures, couldn’t get any takes,, and this despite taking my “lucky charm” with me 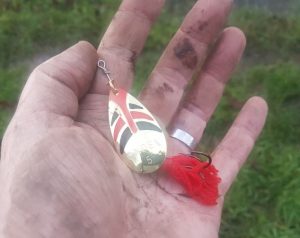 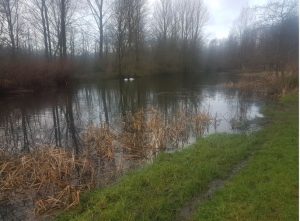 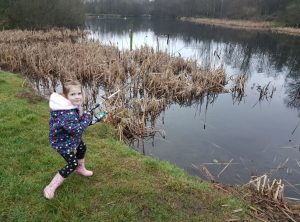 To sumarise the year,,, I got out a lot, but mostly with the kids. I caught lots of fish, including a few brand new species (Pout and Pilchard) but other than a HUGE tench which I lost at the net, I didn’t manage any fish of note.

Imagine my delight when Mrs FishingFiend suggested we visit the Canary Islands for New Year …. 🙂

Read all about it soon!

Now that I am a curmudgeonly 50+years old – I just get grumpy at the traffic, the noise and the litter (though the views are not too bad).

So – instead of heading in the direction of Heaton Park where Parklife is held,,,, I turned in the opposite direction and headed towards Drinkwater Park.

I’m glad I did – as Drinkwater Park Lake has been fishing much better than Heaton Park Lake recently.

I’ve been on a couple of times this week – been smashed up a few times by some unseen monsters in the weeds – hooks straightened…. lost a monster tench maybe 8lb+ at the net 🙁 and landed a few nice fish too).

My set up recently has been pellet waggler rod, hand made float by my mate Mike Cootes, and simple waggler tactics of worm or corn over a bed of hemp and pellets. Nothing fancy but very effective.

Don’t be put off by the weeds,,,, step up your tackle and have some fun, the lake has been fishing really well this year. 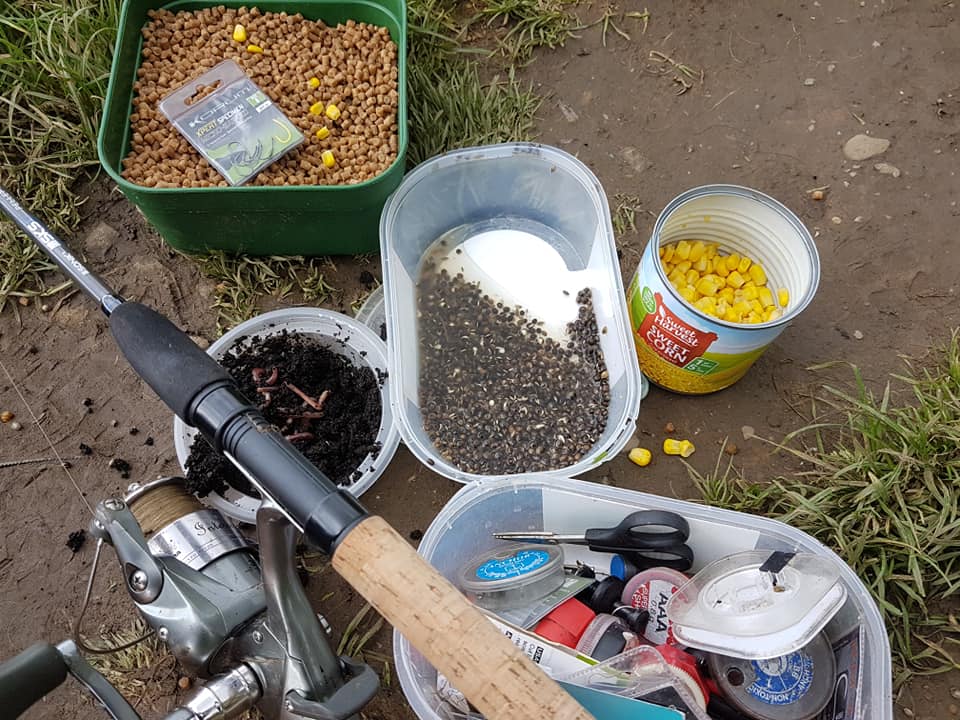 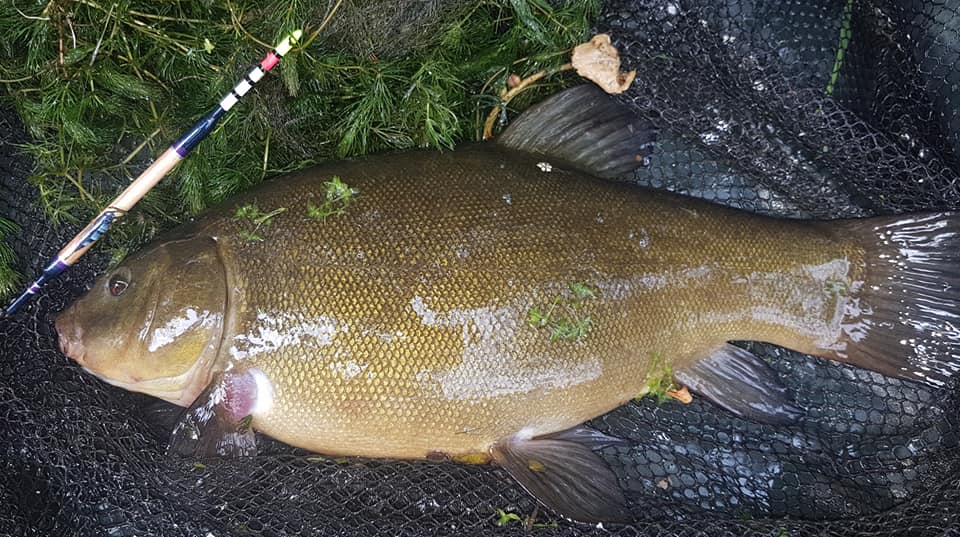