I had the day free to myself, so after yesterdays deluge i took a trip down to the weir pool on the Mersey to see if there was any chance of casting a line today.
On reaching the riverbank i had to do a double take as i have never seen the river so high. The weir and the salmon ladder had completely disappeared and the river was a boiling brown cauldron. I reckon that it must have been a good 15 ft up. 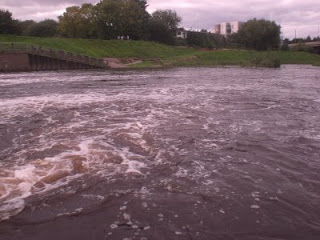 At normal levels taken from the foot of the weir, looking back in the pic you can see 3 people standing at the spot the next photo was taken from this morning. 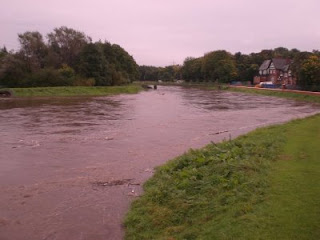 Is there really a 10ft weir under there???

As i now definitely wasn’t going to be doing any Salmon fishing today, i took the opportunity to take a look at the weir where the Mersey joins the ship canal, and where the River Irwell/Manchester Ship Canal passes through a sluice and lock system about 500yds above the weir. 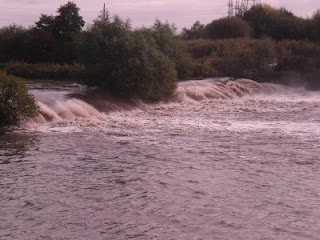 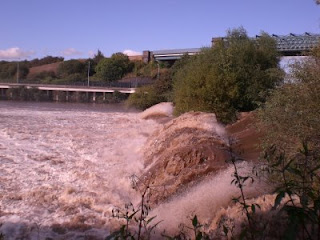 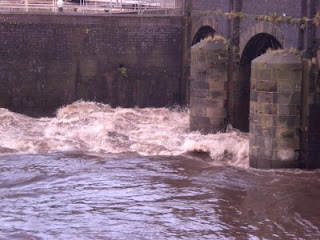 Irwell/Ship Canal Sluice Gates.
As you can see from the photos, the volume of water pouring out of the Mersey and into the Ship Canal was immense. Likewise the water coming through the sluices at Irlam Locks on the Ship Canal. To think that migratory fish are currently running through this is an incredible.
After taking these pics, i had a call from Tony, asking if i was going fishing today. As the rivers were too high he suggested a couple of hours on one of his local lakes which is reputed to hold some big perch. It would have been rude to say no!
A couple of hours later, I was on the banks of a small lake near Bolton, whose calm surface and still waters just go to show the amazing variety of venues we all have the option to fish. I set up using a 3BB still water blue, set slightly over depth, and caught a succession of small roach and perch. As the sun dropped beneath the horizon the number of bites slowed considerably but as a counterbalance the size of the fish i was catching increased. I had a couple of nice roach of between 8-12oz and then i struck into a better perch of approximately a pound. As the sun disappeared at just before 7pm the temperatures dropped and we could feel the chill, despite there being still enough light to see our floats, we both decided to call it a day. One of Tonys friends Pete who had joined us decided to fish on into the evening, i hope his dedication was rewarded. 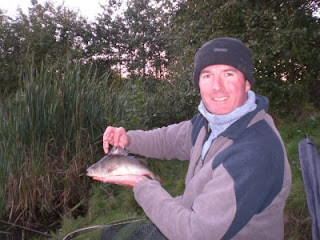