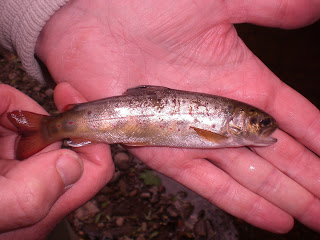 I spent Monday afternoon with Phil having a wade and fish down a new section of one our local small rivers. Our tactics were not very succesfull as after completely fishing through the chosen length of stream, our only fish was a small Chub which Phil caught. I didnt even get a bite.

Later in the evening, Tony joined us, it is good to see him out on the bank again after his recent enforced lay-up. Phil took us to have a look at a new tributary of our local river which neither Tony or myself had fished before.

Upon arrival i had a small trout virtually immediately upon casting in.
Phil then proceeded to catch every fish in the vicinity, taking 10 fish in the next hour using float and worm. 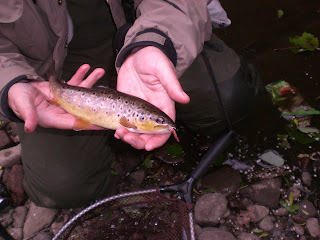 I moved to a slightly deeper swim 25yds downstream and proceeded to catch another trout of about half a pound, which is about the average size of fish in this river.

Meanwhile Tony was trying out his new cut down 4 weight rod using dry fly and upstream nymphing techniques. After having 3 good takes and a nice fish, he very kindly invited me back upstream to show me how to fish using an upstream nymph style.

To say that the bites were electrifying and the whole experience addctive would be an understatement. I think i have become a pretty confident traditional wet fly down and across fisherman but the thrill of watching my line dart forwards when a fish takes is amazing. Being a beginner, i missed plenty of bites but did manage to hook into one fish, which i saw flash and turn in the current before shedding the hook.
I feel like a little boy in a sweet shop at the moment as i dont know which place, method or venue to fish next. Since October last year when i decided to escape the rut of continually fishing the same venues, i have discovered and been introduced to some first class fishing within 15 minutes drive of my front door. Now i know that these venues exist and the quality of fish that they contain, it makes it difficult to decide on where to try next.
I think i have figured out a plan of attack for the roach and chub on the Ship Canal, but Tony has now shown me a new fly fishing technique which i know i am going to enjoy learning to use.
For the time being, the trout win and i’m going to go upstream nymphing after work this evening. Roll on 5pm! 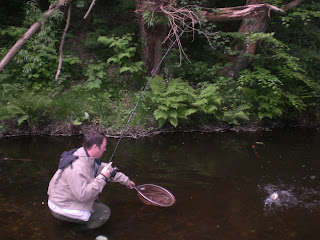