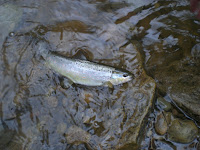 Tonys first fish was very slivery for a brown trout. Most of the trout that i have caught on this section have a lovely lemony colour about them.

Had my first evening session of the year on the river. It only takes 15 minutes drive from my office to get to a fantastic streamy stretch of my local river.
Met up with Tony in the car park just after 4pm, and he told me that despite an extra 12 inches of water and a fair amount of colour in the water, he had been watching fish rising in one of the pools nearest to the car park. Sounds promising!
We walked up to the mill race pool at the top of the beat, where Tony had three lovely fish to my none. We were both fishing using similar tactics, but Tonys river craft is so finely honed i think it will take till the next millenia before i out fish him on a river.
After a couple of hours we slowly worked our way downstream with Tony catching another smaller fish from the Viaduct Swim.
By now i had caught two trees and two plastic bags, i did however get the opportunity to watch two young stoats playing about on the river bank whilst i was untangling my flies from a tree.
As planned we ended up in the swim nearest the car park just as the light was fading. In my opinion this is one of the best swims on the river, but neither of us got a touch. But the river was up and coloured so maybe i will do better here on Thursday.
Am still waiting for a bite let alone a fish whilst using fly gear on the river, but refuse to get disheartened. I hope to get out again on Thursday, and hopefully as long as i leave my flies in the water for long enough, i will eventually come across a brownie daft enough to wolf down one of my poorly presented offerings.
I am still having fun though.
Biggest fish of the evening was about 1.5lbs and it looked as though it had been in the wars recently (heron or cormorant?) 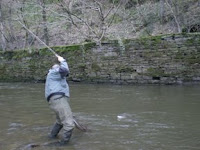 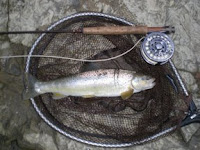 Its not as easy as it looks this fly fishing business, but is quite addictive.