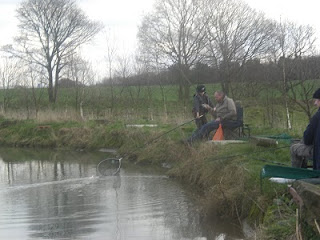 Looks like Phil & Tony have both been badly bitten by the list.
Phil and Tony have now both caught 8 species of fish each this season, to my 6 – a fact which they have suddenly become keen to remind me about.
I’m not worried, the year is still young and I’m sure both of their faces will be coated in egg come the 31st Decemeber.
Good Friday saw us visit Beacon View Fishery near Standish. I fed micro pellets and used a 4mm hooker pellet fished at dead depth to catch a steady succession of skimmer bream to 2lbs and the occaisional roach to a lb.
We were joined later in the day by Tony and his young son. I think Tony was hoping for a steady stream of bites and fish to keep young Logan entertained – but the water is still pretty cold and the fish werent being too obliging. They did however catch some small roach, skimmers and a rudd – which Tony added to his list to bring his tally up to 8. ( are you sure it was you who caught the rudd Tony – I’m sure i saw Logan reeling it in). Its a difficult time of the year to take youngsters out and get them into fishing – unless kids are really keen they soon feel the cold if their not catching a fish every 5 minutes.
Phil_K was again fishing maggot feeder, and also had a steady catch of Skimmers – he also caught two nice perch – the largest was 1.5lbs. 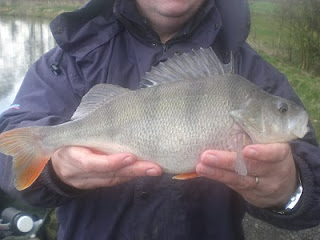 So after being picked on all afternoon for only having caught 6 species – i decided i was going to start overtaking the boys. Therefore on Monday morning – I met up with Phil at Pendle View Trout fishery to have some fun with their always obliging Rainbow Trout. (Phils already caught a Rainbow this season – so it was a safe choice of venue for me).
I caught 10 Rainbows up to 3lb 20z on a variety of flies – the most productive method being a spider pattern fished at about 18 inches depth. 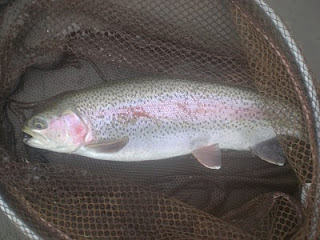 Phil used a buzzer pattern to catch two small perch ( his first perch on the fly) and a couple of small rainbows. 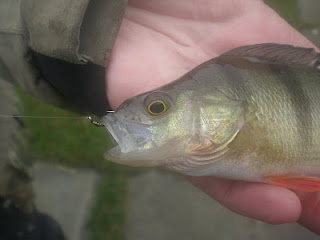 So thats me up to seven species now, and with a couple of months left before the rivers re-open for coarse fishing it leaves me plenty of time to target still water species such as crucian carp, ruffe etc.
manchester fishing Irwell Ribble Trout