I had intended to spend every morning of the last week of the Salmon season spinning for Salmon on the Ribble. However, upheavals at work meant that I only managed to get out on the Friday morning for a few hours accompanied by Phil-K.
I arrived at first light and was encouraged by seeing fish splashing in the first main pool I encountered on my walk downstream. I quickly set up with a red “flying C” and worked my way down the pool. Despite seeing fish moving, i couldn’t generate any interest in the lures i used.
After an hour or so, I moved down to the pool where i took my first Salmon last year.
Again I saw fish moving but couldn’t entice a bite.
Phil-K arrived about 9ish and was thrilled to see a salmon clear the water in part of the pool he was about to fish. But again he had no success despite using a variety of lures.
We slowly made our way back to the car, working through the pools we saw fish showing all over the river. Very frustrating but how could we complain, its just fantastic to see such magnificent fish, being lucky enough to catch one is just a bonus.
Here is selection of some of the lures which I use. 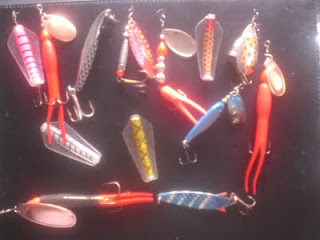