I spent the afternoon at Kingfisher lodges enjoying the lovely spring sunshine. There were lots of fish topping when I arrived, so I set up to fish up in the water and used a top 2 + 2 sections of pole. I’ve had a few people tell me that they’ve struggled on Kingfisher in the past, but every time i go there it doesn’t seem to be much of a problem getting the fish on the feed. The key is to feed a couple of maggots (3 or 4) each cast, a small fine wire hook, a light hook length and a dotted down slim 0.3gram float as many of the bites are only a slight dip of the float. 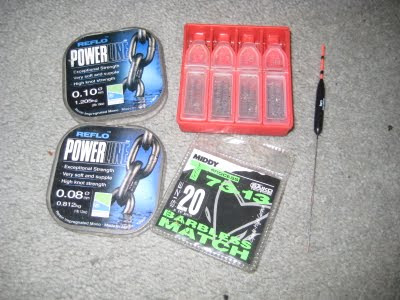 If you look carefully at the photo above, you can see I also put two bands of float rubber around the red tip of the float as this helps show up the shy bites. During the winter, I will fish with the bait just touching the bottom, bulking the shot low down about 18 inches above the hook and a number 10 or 12 shot as a dropper. In summer the fish are found much higher in the water column, so instead of the usual 5ft between hook and float, I shorten up to 2 ft and spread out the number 8 shot to fish on the drop.

Paul and I only fished from 4 til 7 and he also had a net of roach and rudd like this. 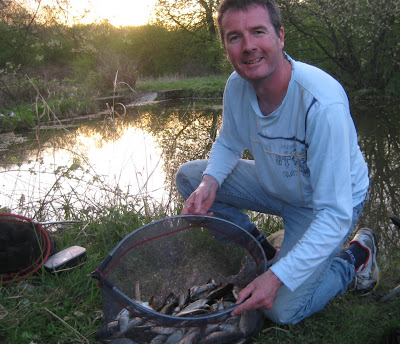 A couple of fish touching 120z but the majority tiddlers – kept me busy. Leaves on the trees, and water temperatures rising – should see me out on the river next week chasing Brownies – I can’t wait.