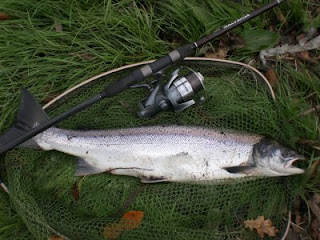 After 40+ hours i finally caught my first Salmon of 7lbs from the Ribble – many thanks to Tony and Phil for all your support, especially Phil for the slightly rusty red flying c which did the business.
As the salmon season closes on the 31st Oct, back in July i had cleared the 30th and 31st of October in my diary as an insurance policy in case i hadnt caught a fish by then. I really didnt think back then that i would still not have caught my quarry.
So this morning the 30th it had been dry for a good few days i decided that my best chance of a fish would be to return to a pool where i knew that fish held in until water levels were higher.
I started fishing at 9am in a pool higher up the beat, and despite having caught some lovely trout from this spot i have yet to see any sign of a salmon. I fished for about 45 minutes until the river bed claimed a size 4 sliver mepps. Rather than put on another lure, i walked down to my favourite pool at the bottom of the beat.
I spoke to a couple of other anglers on my way down river, one guy told me that he’d had 6 fish in the last 3 weeks (four visits) using a small silver mepps with a red latex fringe type tail, the closest thing i had to this was the small, rusty, red flying c which Phil-K had given me as a tongue in cheek present a couple of weeks ago.
Thankfully there wasnt anyone in my favoured spot, where the water levels were a good 3 feet lower than my last visit.
Seeing as though i had tried every trick in the book so far, i tied on Phil spinner, and after about 15 minutes had the shock of my life when i felt my rod buckle over and a thump thump thump from the end of my line. Heart in mouth, i played the fish with a mental mantra of please dont get off, please dont let the knots slip, please dont get off.
During the hours and hours i have spent in pursuit of a Salmon, i had always envisaged the fight of a life time, with clutch screaming runs, arial acrobatics, with heart stopping last minute disasters at the landing net. None of these dreams came about as although the fish gave a thumping good account of itself it didnt make any determined runs, or ever took any line off the reel and was in my net within 5 minutes of being hooked. As i climbed back up the bank to unhook the most fantastically beautiful looking fish i have ever caught, i sadly discovered the reason why the fight was plodding, and slow. The fish had taken the flying c deep and the treble hooks were embedded in it inner gills. As there was no way i could remove the hooks without seriously damaging the fish, i thought it best to use the priest to prevent any unnecessary suffering. I guess the location of the hooks had prevented the fish from giving a really good account of itself in the water and it was bleeding heavily in the net. A real shame.
Other anglers were now fishing the head of the pool on the opposite bank, slowly working their way downstream, rather than fish on, i sat and ate my luch whilst watching them work their flies across the stream. I’ve always found it impossible to fish on after catching a good fish so after eating lunch i packed up and drove home.

Whilst elated at catching my first salmon, it was rather sad to have to kill it, as the longer i fished for one, the more convinced i was that i would return it to the water.
Next year i will try to catch one using flies rather than spinners and lets see if i can get Matthew to catch his first one.
Was it worth the wait? Absolutely.