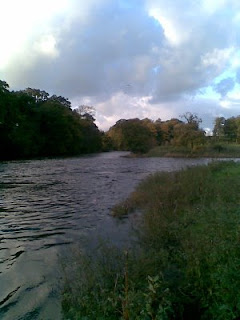 I spent this afternoon thrashing the waters of the Ribble without a take, bite, pull or sight of a fish. Are Salmon like buses – nothing for ages and then two at once? I hope so.
After an early start in the office, i escaped mid morning and was on the riverbank by midday. The river was a good 4 feet up and all the usual gravel banks had disappeared under a heavy swirling mass of coloured water. Undeterred i made my way down to the bottom end of the beat and fished the pool there until about 4.30 and then moved up to the next deep pool and fished til light faded at 6.30pm. Whilst i wasnt rewarded with a fish, i thoroughly enjoyed a little solitude in beautiful surroundings.
I re-loaded my reel yesterday with new 15lb mono, as i was finding that the old line was becoming brittle – if i am at some point in the future lucky enough to hook a fish i would be heartbroken to loose it due to my own negligence. I also bought a couple of size 5 sliver mepps – probably the only type of spinner i didnt own. They felt great in the heavy water this afternoon and i think that the big spinning blade helps to keep the hooks free from leaves which are now beginning to become a nuisance as the river is now full of autumn leaves.
Theres not long now til the season ends…………
manchester fishing Irwell Ribble Trout