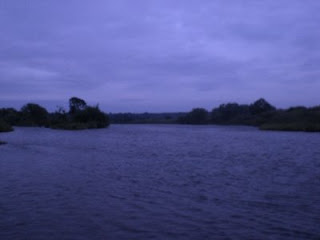 Another four hours now makes the running total 10.5 hours without a sniff of a fish. I did however see a couple of fish leap clear of the water two downstream of where i was fishing and more annoyingly one slightly upstream (annoying because it must have swum past me whilst i was trying to catch it!!).
I used my usual tactics of spinning with flying c’s, big mepps and for the first time this evening i tried a tasmanian devil which is a bladed type of revolving lure – i shall put of a photo of them later this week so you can see what they look like. The bottom of the river has more than a few snags, and i again lost a couple of spinners. This salmon quest is becoming expensive as well as time consuming.
Tony accompanied me this evening, and he fished 25 yds downstream of me, trotting maggots underneath a stick float running along the crease between the fast and slow water. He had a pretty successful evening, catching lots of reasonable sized roach and dace, however he lost what he described as his “roach of the season” at the net. Estimated at a good 2lbs i know that Tony would have rather caught just that fish than all the others. A 2lb roach is something special, and to lose it whilst attempting to net it is galling. 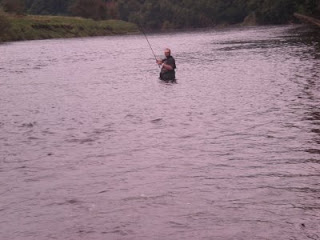 Tony had brought some worms with him, so as a change i tried to bounce some worms through the faster water using a rubber bouncing bullet. However the snags claimed my tackle twice in 3 casts, so i soon went back to flinging my spinners.
We fished until dark, which as you know is now unfortunately only 7.30pm. I dont know how many more midweek trips after work i am going to be able to fit in as i dont really like to leave the office before 3pm just to go fishing.
Next time i fish the river i am going to fish worm under a chubber type float as if the Salmon arent present maybe i might tempt something else.
manchester fishing Irwell Ribble Trout