Matthew has recently been moaning that i seem to have most of my best sessions on rivers, and that he wants a pair of waders of his own to enable him to join in.
As hes is now approaching 14 hes strong enough to be able to stand in the flow of a river without tiring too quickly so he is now the proud owner of his own chesties and hopefully will be accompanying his father on a more regular basis fishing on the river.
To celebrate his new waders we joined Tony for a trip to one of our favourite sections of the Ribble for a long summer evening session.
Matthew took up station in the main run, and Tony fished his favourite swim a little down stream.
My job was to be Matthews ghillie, showing him where to cast, feeding the swim etc.
During the first couple of hours we didn’t have much luck other than a couple of very tentative sharp bites (probably dace) whilst Tony had some dace, eels and a nice chub.
It was only when we waded across the main flow and fished the river from the rock ledge that runs down the centre of the river that we had some success.
The float dipped, Matthew struck, the rod hooped, the reel back winding and eventually this lovely chub graced the net. 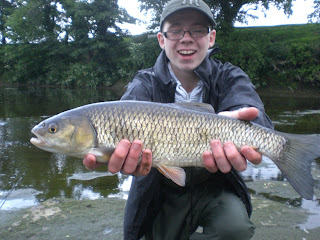 Well done Matt – hopefully the first of many 🙂
After chatting for a while with a couple of other anglers, the swim was rested and i had a few runs through and picked up this surprise grayling (sorry Phil-K thats 20 now). Its the first grayling I’ve ever seen from this part of the river. 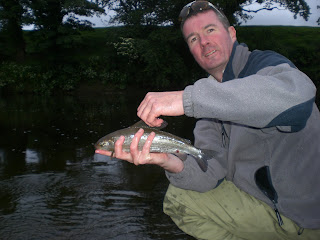 As the evening drew to a close – Matt and I could only winkle out a few more small dace, it seems as though the Barbel were not in the mood to feed. Tony had moved upstream to fish some fast streamy water where he took a couple of nice brown trout.
We packed up as night fell and went upstream to tell Tony that we had had enough – only to see Tony running down the bank towards us, rod bent double into a really good fish.
We were all convinced that it was a big double figure barbel as it hugged the gravel bottom and refused to budge, using the heavy flow to its advantage. Tony let Matt hold the rod for a moment so he could feel the strength of the fish and the rhythmic pulsating thump of the fishes tail as it held position in the heavy flow. 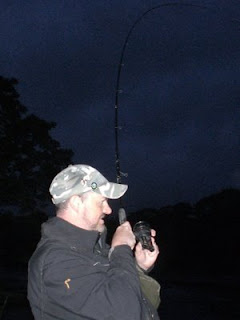 A long dour battle ensued, whenever Tony gained line on the fish and brought it towards the nearside shelf, the fish flicked its tail and moved back into the strong central flow.
After a while Tony started to complain that his arms and shoulders were hurting – half and hour had passed and we hadn’t even seen the fish yet and dusk had turned to dark – Matt made the wise crack that it was only 15 minutes to half time and then Tony could have a rest.
Eventually Tony lifted his rod tip high in the air to see if he could raise the fish from its bottom hugging position. At this point, i don’t know who was the more tired, Tony or the fish as this battle had lasted a good 40 minutes by now.
A few minutes later and I got a glimpse of bronze and saw a good fish but certainly not the big double figure barbel we had been expecting. It was only then that the possibility of a foul hooked fish was broached and 5 minutes later as a good 8lb fish has banked that we could confirm that it had been hooked in one of its pectoral fins. 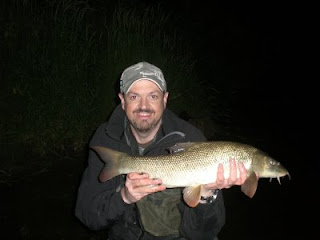 As we walked back to the car in darkness Tony was a little disappointed that it wasn’t a big double, but Matthew was enthused by the lengthy battle and capture of this magnificent fish – it has certainly fired him up and I hope that one day soon he can have the pleasure of landing his first Barbel.