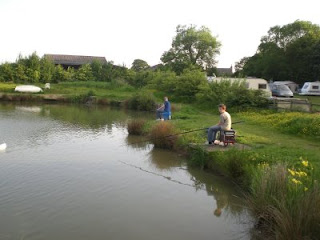 Now that the rugby season has ended, my son Matthew decided he would like to have a carp fishing trip. Over the years, he’s become quite proficient in the use of a pole and its his ambition to catch a twenty pounder on his margin pole. With this in mind we took another trip to Heskin Old Hall Farm to fish their specimen lake which is reputed to have fish up to 30lbs in its shaded depths.
Accompanying us was Matthews friend Joe who had never been fishing before. As i anticipated lots of tangles, rig making and instruction time I didn’t bother to take any tackle for my own use, and just enjoyed the glorious weather help the boys.
We tackled up at about 4pm and both boys were using strong poles with 20’s elastic fishing tight to the margin using corn on the hook over a bed of hemp.
By 7pm we had seen no carp action, and only a couple of small skimmers had been landed. In order to prevent long faces on the way home and future refusals to come accompany me fishing, I coerced the boys into moving over to lake 2 which is full of smaller carp, but with the occasional double lurking just to spice things up.
It was a good decision to move, Joe hooked into a really powerful fish on his first put in. As the fish ran, I didn’t have time to tell him to add more sections to the top 3 he was using, so it was a hold on tight job for him. These hit and hold tactics are fine for smaller carp which soon tire against the pull of the 20’s elastic but Joe must have really hooked into a lump of a fish as it straightened out a size 14 Kamasan B911!!!
Despite loosing a biggun, it really fired up the boys enthusiasm, and it wasnt long before they were both catching carp to 5lbs on a regular basis. 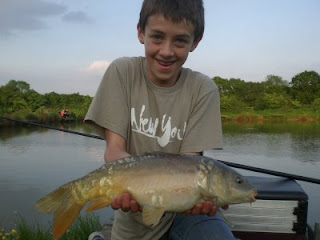 Maybe if we had stayed on the specimen lake the carp might have come on to feed as the light was fading, but having two teenagers i thought that fish on the bank and a bit of fun fishing would be a greater long term benefit to them in terms of their learning to enjoy fishing.
Heskin Old Hall Farm is near Eccleston in Lancashire, and I would recommend it to anyone who wants a fun day out. Banks are clean and tidy, lovely rural location, no idiots, plenty of bites and most importantly lots of fun. 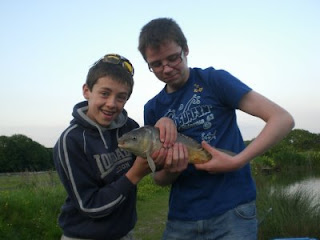 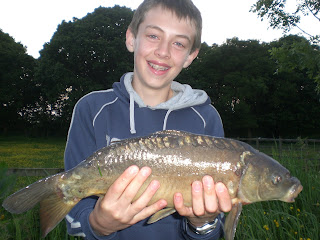 We packed up at about 9pm, and i think in those last two hours the boys must have had about 10 carp each.
manchester fishing Irwell Ribble Trout