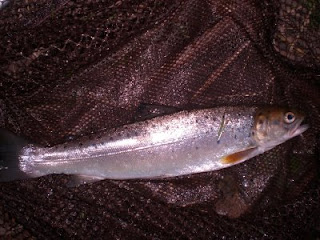 I took a trip up to the River Ribble yesterday afternoon, to see if i could catch any fish from the “hot” swim which has produced big barbel, chub and sea – trout. On reaching the river bank i really fancied my chances of getting amongst the fish, as the weather was glorious, the river levels perfect and the car park at the end of the main field empty.
As i walked up river, i only saw one other fisherman – who reported catching a sun tan but no fish. Ha – what do these quiver tippers know – armed with my 15ft trotting rod and new centre pin reel i couldnt fail to catch in conditions such as these!
As ever, over confidence is often rewarded by a kick in the nuts, and you guessed it, i didnt get a bite between 3.30pm when i arrived and 8.30pm when i finally gave up and decided to move swim. For some reason the hot swim doesnt like me, as i have struggled yet again, in a swim which i know contains some decent fish.
I was loathe to go home early on such a pleasant evening, so i decided to move downstream a few hundred yards and fish in the more tranquil slower moving water in front of the car park.
I have fished this area only once before with Tony when the river was in flood, and managed to catch half a dozen cracking roach. Yesterday the river levels were at least 3-4 feet lower then my previous time at this swim, and i slid down the steep banks into the river and walked a third of the way out from the bank.
I fed in a constant supply of loose fed maggots, followed by a light stick float with the bait a 3/4 depth. The first run through resulted in a minnow which was a welcome sight as it saved me from a blank!!!.
As the evening drew to a close i enjoyed some great sport catching about 8 chub to over 2lbs, a lovely roach of over a lb and my first sea trout of the season (pictured above).
I fished on until after 10pm enjoying the feed, cast, run through and retrieve sequence that is neccessary. I didnt miss any bites or bump off any fish so things seem to be improving (have changed from kamasan to prestons hooks). I only saw a couple of other guys fishing, and no – one else seemed to have caught any barbel so i was very satisfied with my mixed net of fish.
However the lure of those big fish, from the swim that Tony and Phil have had so much success in is becoming compelling and every time i think about where to go fishing next i am drawn to this swim. I can already visualise myself there on Tuesday evening!