Phil and I decided to take a day off work and visit Partridge Lakes. Despite it being only half and hours drive from home, its a commercial I’ve never visited before. They have various lakes and canals, including two lakes Holbar one and two which are supposedly stuffed with decent carp.
Now I know its still early in the season, and that the carp haven’t really switched onto feeding mode yet, but i cant resist the attraction of my tip flying round whilst fishing the method feeder. So i fished 8mm pellet hair rigged and sometimes banded with a method feeder. Phil started out using waggler gear and maggots fished in mid water – we were both plagued with F1 carp of about a pound in weight. (not really enjoyable fishing if the truth be told). 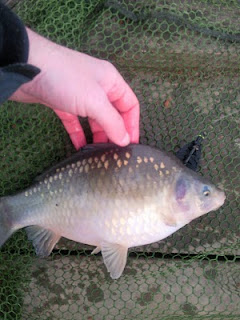 Mid afternoon, Phil decided to have a change of tactics, so he set up his electronic bite alarm, and a maggot feeder rig, cast into mid lake and sat back in his chair for a snooze.
First cast – his alarm screamed and he landed this beauty of 13lb 12oz 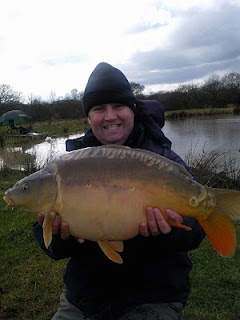 Second cast- his alarm screamed again and he landed another cracker of 12lb 10oz. 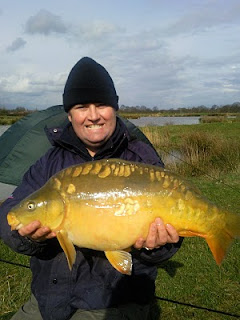 Third cast – i was seriously jealous by now- he landed a chub of about 2 1/2 lbs.
As i had been a silly fool and only brought pellets and no change of bait – i was stuck with catching tiddly F1’s. Next time I visit, i think that adding a tub of worms and a tin of sweetcorn might be a sensible idea.
Phil also caught a little perch – which means he now has 8 species to my 6 for the season so far.
manchester fishing Irwell Ribble Trout