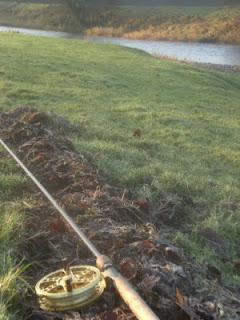 As the floods have subsided, I’ve been looking forwards to getting out on the Ribble and having a try for a Grayling or two.
Saturday morning saw me donning my waders, and braving the icey cold water of a favourite stretch of river, which I know holds some lovely fish.
After 10 minutes or so of feeding the first swim with a regular supply of maggots, I ran the float through, and 3/4 of the way down the run, the float buried and I was into a good fish. I guessed it was a Grayling and not a trout, as it kited from one side of the river to the other using the current to fight the bend of the rod whereas a trout makes strong determined runs and tends to splash on the surface more.
I knew it was a good fish, from the pressure it exerted on the rod, but sadly as slowly waded backwards into shallower water to attempt to net the fish, it shed the hook………

A few more runs through later, I landed its smaller cousin, and then a tiny little Salmon Parr – always a lovely sight – and one I would dearly love to see on my Manchester rivers. 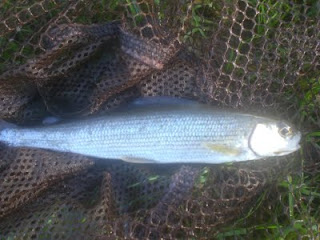 Its easy to spot the difference between a Salmon and a Trout Parr, as the Salmon Parr tends to have a single black spot on its gill covers, and has elongated pectoral fins (like a flying fish!). 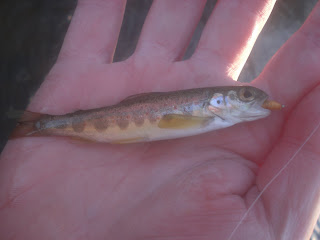 As I as catching nothing but small stuff, I moved downstream to where the two rivers meet. Theres a lovely channel to fish on the near side bank, and wading past knee depth isn’t necessary. I was really feeling the cold, and the left leg of my waders has developed a serious leak!
Again, I didn’t have to wait long for action, and was again into another decent sized Grayling, which i could see flashing in the current. Again, as i drew the fish in close for landing – the hook pinged out. Gutted, i sat down and had a cup of tea and a mars bar, and changed hook to a size 16 Drennan chub hook. A bit larger, and a heavier gauge of wire than I like to use for trotting maggots, but needs must after loosing two decent fish.
Surprisingly I didn’t get any more bites from the rivers meet swim, and as my left leg was beginning to numb up with the cold, I walked back upstream to my original swim, to have a last half hour before enjoying the open fire in the Pub.
After settling in to position and feeding the swim, I again hooked into yet another decent fish after a few runs through of the bait.
The pattern of the day repeated itself and I was close to launching the rod after the fish when it threw the hook again tantalisingly close to the net.
Ah well the final score was Grayling 5 – Mike 3 and a wet leg.
But I had a great couple of hours in the pale, low wintery sun, not another soul about. The tide line of the recent floods was high above in the field above the river, right up to the gate near the little bridge. The big tree stump, which Tony used to enjoy fishing behind has now disappeared and some of the shingle seems to have shifted.
I’m away now for Christmas and New Year on a family holiday – so seasons greetings to you all – and I hope Santa brings you nothing but booze and fishing tackle.