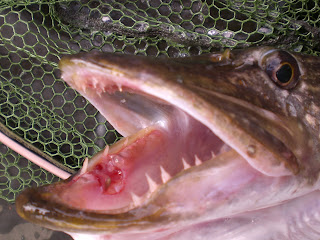 After weeks and weeks of terrible weather it was a pleasure to go fishing and sit in the sunshine. Matt was determined to catch his first ever pike today, and we went to fish the moorland reservoir i have been fishing recently. We were accompanied by Phil, Neil and Big Dave and everyone had pike on their minds.
I had the honour of catching the livebaits, and as expected i caught 3 nice roach in with my first four casts. Matt was the first to get a live bait on his size 10 trebles, and i showed him exactly the spot where to cast to, only a couple of yards from the bank. Within seconds of casting in, his roach was taken by a nice pike of about 5lbs. 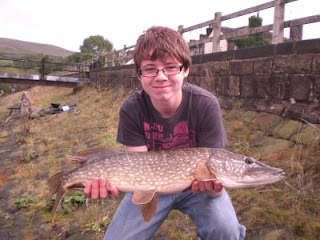 He is becoming quite an acomplished angler now, keeping his rod tip up, not allowing any slack in the line, and using his backwind to play the fish as it made repeated runs. The fish was quickly unhooked on Phils unhooking mat, a quick photo and Matt watched his fish recover and glide away into the deeper water. I dont know who was more thrilled, Matt or me.
Big Dave caught the next pike, a slightly larger one, again close in to the bank using livebait. 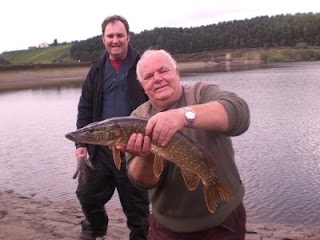 The session took on the same pattern as my previous two recent visits to this venue, with the roach bites drying up after about a dozen fish.
I think the Pike move in over the baited area and the roach back off. This point was proved by casting 20 yds either side of the original baited area where i was able to still pick up the occaisional fish. Phil had a dropped run later on, yet again close to the bank using livebait and Neil had a fish snap at a wobbled dead bait but was unable to set the hooks.
Towards the end of the session i started to get more roach again, but they were being attacked by the pike as i was retrieving them.
Dead baits dont seem to work on this reservoir, as Phil, Dave, Neil and Matt used dead baits throughout the day but didnt have any runs using them. I am not going to be able to get back to this venue for a while now due to other comitments such as my salmon quest and a couple of fly fishing trips before the trout season ends, but come the winter months i wonder how big a pike we can catch from this reservoir?
manchester fishing Irwell Ribble Trout