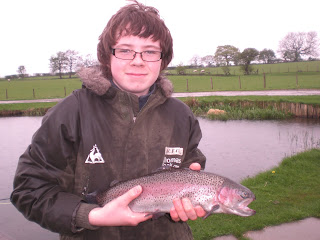 We set out this morning with the intention of having a 4 hour session at Pendle View Fishery, however as it was raining hard when we approached the fishery we decided to have a drive round to have a look at a few new venues rather than to fish in the rain.
We had a walk along the Ribble, watched a few guys fishing, and saw some small fish rising. It looked like a great spot, and i cant wait to fish there tomorrow with Tony.
As the rain had eased off, we decided to have a short 2 hour ticket back at Pendle View. While we were setting up, Matt could see fish rising near the feeder stream inflow, and told me thats where he wanted to fish. It was a good spot as the wind was blowing over his shoulder and would assist his casting.
I set his rod up with a shortish leader and a white and green cats whisker (tied by Tony).
On mine, i set up with a green suspender buzzer on dropper and a heavy black buzzer on point.
Matt caught hooked a fish after about 10 minutes, it went off like a cracker and he found it was great fun to catch on his new 5 weight rod. After a great fight he slipped his first ever fish on the fly into the net. It was a Rainbow of 2.5lbs, the biggest fish i have ever seen caught at Pendle View – congratulations Matt.
Of course just to make Matthews day even better i then went on to catch the smallest fish of the day, a little brownie of about 4oz.
It then started to rain heavily again, and Matt decided to go and sit in the car whilst i fished on for another 15 mins. I ended up with 6 fish in an hours fishing, all caught on green or black buzzers.
The water was much clearer than during my previous visits to this lake, and it was very interesting to watch the fish cruising the lake through my polaroids, especially watching fish deciding whether to refuse or accept my flies.
It was also good to catch one of the lakes natural brown trout, even though it was small,it was still a beautifully marked fish and was a pleaseure to catch. Cant wait for the river tomorrow. 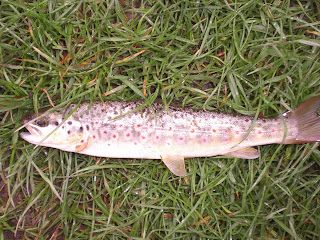