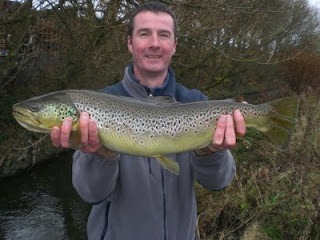 I sometimes wish i owned a set of scales – this one measured 27inches and came from a small river in inner city Manchester.

One of my local rivers has been so polluted for so long that even by Mancunian standards its considered a lifeless sewer. However a few weeks ago whilst on one of my lunchtime walks i spotted a shoal of small roach from a bridge, and decided that i would give it a try some time during the next few weeks.
So this today i had a relatively light workload, so decided to take a long lunch.
The first run which i tried for about 15 minutes claimed two hooklengths so i decided to move downstream about 100yds to a deeper steady glide above a weir.
In this new swim my float buried on the first run through, and what i thought was a good chub smashed me after about 5 seconds. I stepped up my terminal tackle from a 0.10 hooklength and a fine wire maggot hook to 0.13 and a forged size 16 chub hook.
A fed another half dozen maggots then let the float follow them down the river, in exactly the same spot as my previous bite, the float buried and i hooked into what i at the time thought was a good chub. However, at the end of the fishes first run of about 20yds it leaped out of the water and i realised that i had a big trout on. The fish made at least 4 more strong runs, the last of which saw me running after it as my Abu506 seized up. After more than a few last minute surges away from the net i had this cracker on the bank. 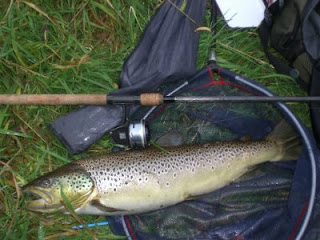 By far and away the best Brownie i have ever caught, and to catch it from a river that has been so recently devoid of life is astonishing. This fish must have survived many pollution incidents on the river, the most recent being only 3 years ago when a local soap manufacturer let thousands of gallons of detergent into the river which resulted in in a 6 foot layer of suds covering most of the river. Amazing really.
I have looked up scales which show that a 27inch trout should weigh 7lbs, but i think it weighed rather less. I have never owned a set of scales to weigh the fish i catch and think that i am a good guesser. My guess when i saw it was 5lb so if we split the difference and call it 6 then i will be more than happy.
My first fish from that river – how can i ever go back? You know i will, and am looking forwards to sharing my secret river with you.