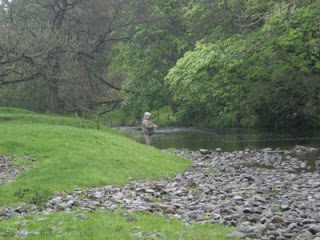 The Hodder is one of the main tributaries of the Ribble and flows through some of the most beautiful scenery in the county. We fished a beat in its higher reaches, the river being rocky and shallow and despite recent heavy rain, there was little colour in the water.
There were four of us fishing, and each of us used different tactics. Tony upstream dry, Phil a mixture of down and across wets and upstream dry, Pete down and across wets and my own favourite tactics (my only tactics) of upstream gold head and spider on the dropper. 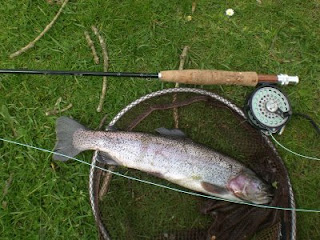 I hit my straps right from the off by catching this rainbow which had escaped from Stocks Reservoir higher up the valley. It really gave me the run around on my light river tackle, and after a really good battle it met my priest and the made an acquaintance with the bottom of my fishing bag.
I rarely take trout from a river, but escaped rainbows from stocked lakes don’t belong in a river in which migratory use to breed, and which has fragile stocks of native brown trout – so this fish was dispatched and made a welcome breakfast for one of my neighbours.
After a dry start, the expected weather front arrived and it rained heavily intermittently for the rest of the afternoon.
The fish took both the black spider on dropper and the gold headed GRHE on the point, though sometimes it was surprising that such small fish could attempt to swallow my flies – they were so big compared to some of the fishes mouths that i was amazed at their greed!
The highlight of my day was the half hour which was spent when all four of us met in mid session. Phil had a fish rising in his swim which he was casting a dry to, and Pete, Tony and myself sat at a discreet distance behind him giving less than gentle “advice” 🙂 The fish rose and rose and rose, Phil struck and struck and struck – hilarious. He eventually caught a very greedy/daft 6 inch brownie. 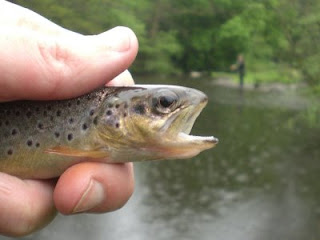 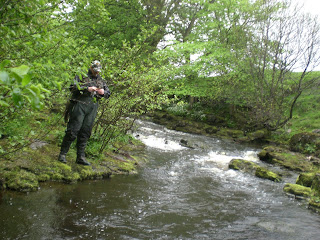 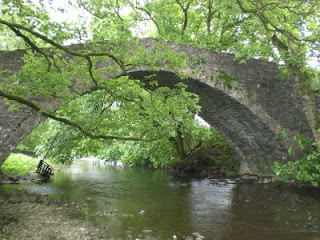 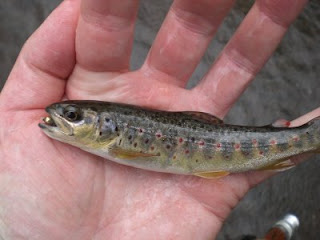 After this barracking of a fishing friend, i took the opportunity to wind Phil up even further adding to my seasons species list by rummaging around in the bed of a feeder stream, where we found all sorts of bugs and beasts, bullheads. loach and a bootlace eel. It was unbelievable that there was such a diversity of insects and fish in 15 yards of such a small stream. (I’m on 16 now Phil).
As the rain intensified we moved further and further upstream, eventually reaching a point where it was possible to jump from one bank to the other – talk about a rivers upper reaches! Despite the heavy rain, we all caught fish and had a great afternoon. Good fishing, company and beautiful scenery. I’m sure my dad and Matthew would love to fish up here.
manchester fishing Irwell Ribble Trout