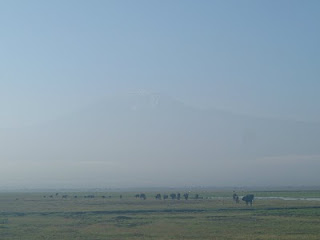 Buffalo and Hippos in Amboseli National Park – with Kilmanjaro in the background.

I’ve just returned from a Christmas & New Year family holiday spent on the coast of Kenya about 30kms north of Mombasa.
I’m not going to bore you with the details, other than to say that the weather, hotels and game parks were better than I ever imagined.

A Duddy family holiday wouldnt be complete without a day dedicated to fishing, so I booked a big game boat, complete with outriggers for a day trolling the waters just off the coral reef which protects the Kenyan shore from the Indian Ocean.
At this time of year Sailfish and Marlin are the target species – neither of which i’ve caught before.
As the boat emerged from the creek, and made its way beyond the reef, the crew set up 8 rods baited with a type of gar-fish flapper with a latex muppet head (i did take photos of the bait and boat set up, but Lucia deleted them so she could take more animal photos).

After about 4 hours trolling up and down the coast without a touch I was beginning to think that I was in the middle of the most expensive blank session of my life. But our skipper was very experienced, and soon after spotted a flock of sea birds diving into the ocean after small fish.
As we approached, we could see tuna, dorada and other fish crashing through the shoal of prey fish. On our first run through the area, one of the reels screamed and Matthew was passed the rod to play a fish. 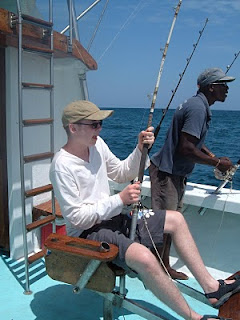 It was amazing to watch Matt playing this dorada, which made a number of surging runs which ended in aerobatics as he tightened the clutch on the reel.

I think the expression on his face, just about sums up the excitement we all felt at his catching the first fish of the day. 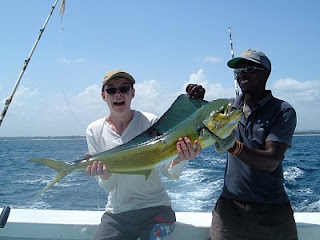 After re baiting all the rods, the skipper made a second pass through the area of diving sea birds. If we got a bite, it was my turn to take the rod, and i wasnt disappointed as about 15 minutes later one of the rods bent over and its reel screamed.
Sitting in the fighting chair, i was powerless to stop the fish running at least 500metres of line off the reel. I then had the strength sapping task of pumping and reeling the fish back towards the boat. The strength of the fish was amazing, as no sooner had i got the fish 2/3rds of the way back to the boat – it took most of the line back again with another run.
As time passed – it slowly dawned on me that I was attached to the fish of a lifetime and my heart was fluttering with panic ( i have a terrible knack of bumping off big fish).
Luck shone for once – and this was my reward! 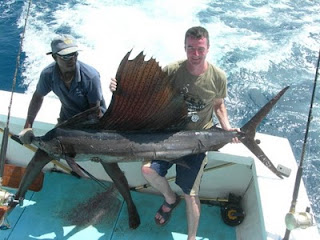 There were five of us on the boat, me Matt, Lucia and my parents. Apart from Lucia who wasnt really bothered, we all caught a fish. 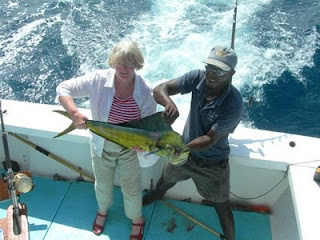 Look at the expression on my dads face as he landed this Wahoo (like a super sized big toothed mackerel).
Photo to come.

All too soon – our time was up and we turned around to take the long motor back to port.

Catch and release doesnt seem to exist in Kenya, all the waiters in the hotel knew we were going fishing and wanted us to bring them back a fish for Christmas so we happily obliged, though we had to have a little battle with the owner of the boat who also wanted our catch.

Back on the quay, my fish weighed in at 60lbs – easily the largest fish I’ve ever caught.

By the way – cold smoked sailfish tastes fantastic for your Christmas Dinner!