I’ve fished a particular swim on the lower Ribble twice in recent weeks and despite catching a fair few fish, the only good rod thumper I’ve managed to hook was a Chub of about 4lbs. Now this swim is a fast tongue of water over a gravel bottom, feeding into a big, long deep pool – its one of those places that screams FISH HERE at me – a real classic stick and pin run. On the two previous occasions I’ve tackled this run, I’ve fished from the southern bank and have had a deep back eddy in between me and the area I really think holds the fish, so at lunchtime today I had a few hours to spare and decided to approach the swim from the northern bank.

By changing my angle of approach, I could now wade over the shallow shingle bank, and stand waist deep on the side of the drop off into the faster deeper main current and run my float along the crease between the fast and slower water.

Again I set up with my standard stick float gear of 5bb shouldered wire stemmed stick and a 5lb hooklength, but rather than using a Drennan specialist size 14 hook, I used a Drennan size 16 carbon chub hook. The finer wire gauge i hoped would make a difference to presentation, and I know that the hook is strong enough to hold any fish under 10lb without loosing shape.

After spending 5 minutes feeding the swim and watching the world around me I had a first run through with the float.

About 3/4s of the way down the run, the float buried and i felt an almighty bang on the rod. Fish on!
After a brief run, the fish stopped in the central part of the heaviest flow and pulsed in the current, typical barbel behaviour. Over the last few sessions I’ve been using my avon rod for trotting the Ribble rather than my 15ft lightweight Drennan, so by using the arc of the stronger rod i was able to apply low side strain and gently move the fish into lighter flow. (its nice to be able to boss a fish for a change rather than being bullied by any fish over 3lb as was happening with the Drennan). 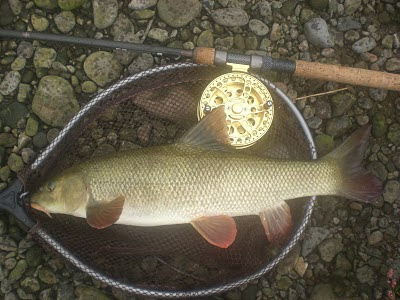 After what felt like ages but was probably only 5 minutes i slipped the net under this nice barbel which weighed 4 1/2lbs. Action was fast and furious for the next 3 hours, I managed another half dozen barbel, a nice chub, lots of dace to about 6oz, a small brown trout and a surprise flattie. 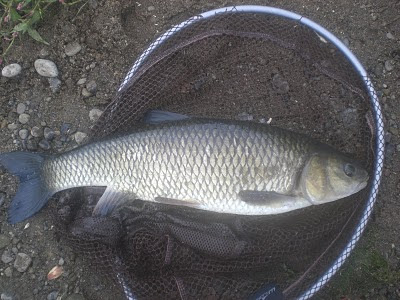 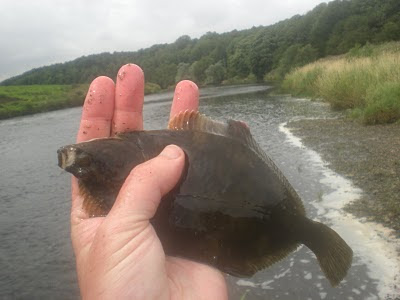 I’ve decided that as this flattie was caught above the tidal limit, on coarse fishing gear then I’m claiming it as a species on this years list – so now I’m up to 21.
So the upshot is that by being a member of clubs which own opposite sides of the river bank, I get the opportunity fish the same swim in different ways. The grass on the north bank is definitely greener.
manchester fishing Irwell Ribble Trout