After spending a large part of last season chasing trout on my local streams and rivers, it has become more than obvious that shop bought flies are not as effective as those tied by my friends. Rather than constantly badgering them for “samples” i decided that during the winter months i would learn to tie my own. Phil-K persuaded me to join Bolton Fly Tying Club whose members have been very patient with my cack handed ineptitude. The talks and demonstrations they put on during the dark winter evenings have been both informative and thought provoking. In addition to the talks, demos and tying the club also organise trips to fly fishing venues throughout the north of England and the occasional competition.

So last Tuesday the evening was spent tying three flies for their first competition of the year -a three fly challenge at Foxhouses Lake near Lancaster. The rules of the competition being that you are only allowed to use three flies all day which you must tie during the club meeting. Rather than tying imitative patterns such as buzzers, nymphs i made three big brash lures thinking that freshly stocked early season Rainbow Trout would be aggressive and likely to be attracted to large bright lures. I think some of the members were amused at my dayglo lures – more suited to mackerel fishing than trout fishing. 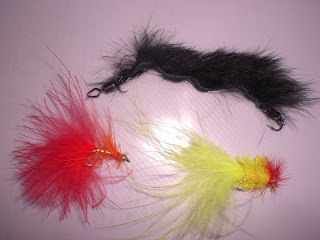 However, yesterday was the day of the match and despite appalling weather conditions i had the pleasure of catching 11 Rainbows up to 4.5lbs. I took extra special pleasure from catching these fish as they were the first fish i have ever caught using flies i tied myself.
The leech pattern was made from a strip of rabbit fur, the two other flies from yellow and red marabou feathers and yellow fritz.
The high winds and hail storms didn’t spoil a great day out which was as much a social experience as a day out fishing. The owner of the fishery Pat was a great character – I know it made his day when i told him that i caught my first fish using self tied flies on his lake, using tools, fur and feathers which i had purchased from his website http://www.flytek.co.uk/ 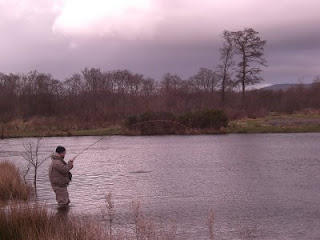 The wild brown trout season opens this Sunday and I’m really looking forwards to getting out on the river with a box of flies which i have tied myself. I only started fly fishing for trout again seriously last year and it was great fun. My next challenge is to catch a fish on a dry fly! 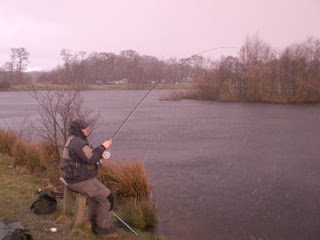 Lets hope that the weather is better than Sunday. This is a picture of Chris from Bolton Fly Tying Club – he was using an olive damsel nymph pattern which he’s promised to teach me how to make. Whilst fishing is often a solitary pastime – meeting other likeminded souls has really revved up my desire to get out fishing on some new waters and catch some fish. Oh by the way I won the match:)