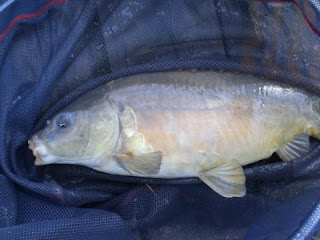 The lure of catching a Silver Bream led me to visit Heskin Hall Farm near Chorley. Over the years I’ve caught all sorts of fish, but Silver Bream which generally inhabit Eastern England are a species which have always eluded me. Their website http://www.heskinoldhallfarm.co.uk/
states that Silver Bream are found in two of their lakes, so armed with hemp, caster, worm and pellets I set off mid afternoon in glorious sunshine for an evenings fishing on a new venue.
There are three lakes at Heskin Hall and on arrival I found that there was a match being held on Lake 3, so after having a quick look at Lake 1, I took a walk across a field to Lake 2 which was a smallish lake of less than an acre, with anglers lining one bank, but none on the other
I set up on the other. 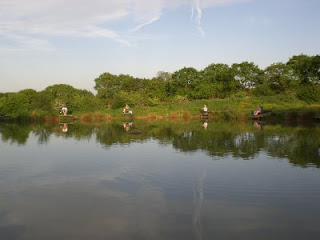 After plumbing up I found the bottom of the near side shelf at about 5 metres to be 5ft, so I set up with caster as hookbait, and cupped in some hemp and micro pellets as feed.
To cut a long story short, I had a fabulous evening catching quality roach and rudd, the odd skimmer, tench and carp. By the time i packed up at 9pm, I had drawn the fish so close in, that I was using just my top two sections of pole, and was fishing up in the water at 12inches. Every time I loose fed, my swim boiled with fish competing for the bait – exciting stuff.
Using fake (foam) hemp as hookbait I was catching some really good roach, averaging well over a pound in weight, and the carp were averaging about 3lbs. Fish followed fish followed fish, if I were able to use a keepnet, I would have had a bag of well over a 100lbs by the time I packed up. My best net last year was 72lb of carp at Spring Lea in Shropshire with Big Dave, this was much better fishing by far, especially as the majority of my bag was made up of Roach. 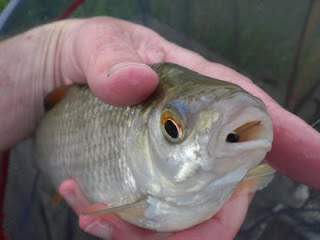 Unlike other commercials, I caught very few fish in poor condition, this can only be put down to the fact that matches aren’t held on this lake.
The other anglers on the lake were all using meat and sweetcorn trying to catch carp and a few of them seemed to have a few decent sized fish. I bet if i had tried large pellet or meat I would have had a few more carp which were probably lurking underneath the roach and rudd which were taking the loose feed aggressively as i fed the swim.
I only fed one line, and had one top section set up. Next time I visit, I’m going to try exactly the same tactics, but have a second set up ready to occasionally fish specifically for the carp which must have been under the silvers which I was catching. Oh yes, I will take alot more hemp and caster too. A tin of hemp and half a pint of casters was really not enough. 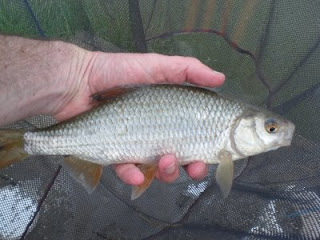 The roach were of such a good size that they were pulling a couple of feet of 14s elastic out of the tip of my pole. Great stuff, I’m looking forwards to going back.
As for the Silver Bream, they didn’t exist. I spoke to the bailiff, and i don’t think he really knew the difference between the two species. Was a pity really but didn’t stop me from having a really great evening.
manchester fishing Irwell Ribble Trout