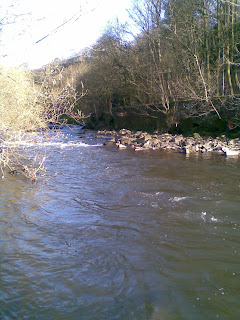 After an incredibly busy couple of days in the office, my head was in a different place as i packed the car to go fishing after work today. Not only did i forget my waders, i also left my boots and camera at home, so turned up at the riverside in a pair of white running shoes – not the ideal footwear for fishing, its a miracle i remembered my rod.

I had arranged an after work session on the river with Tony and Phil, and we must have all been having a busy day as i was the first to arrive just before 6pm. The river was still a good foot higher than normal but was much clearer than when i drove over it on Sunday – see photo on previous post.
Being the first to arrive gave me first go on the car park swim and i had a fish on after only 5 or 6 casts. Unfortunately it threw the hook after only a couple of seconds, but still it was a promising start.
Phil and Tony arrived, with Phil opting to try out small spinners and Tony his short fly line technique. The swim is a squeeze with three anglers, and as i had already had a good go at the bottom end of the swim i decided to move up river to give the lads a bit more room to fish.
Fishing one of the runs further upstream and had two small fish using Tonys home tied silver bead headed pheasant tail nymph, I caught the first fish in the fast streamy water at the head of the run and the other right at the tail end of the pool, just before it falls away into another riffle.
I apologise for the lack of a photo but i hadnt my camera with me and the battery on my phone was too low to allow me to take any further pictures.
As dusk was falling Tony and Phil came up to join me, and whilst Tony hadnt caught, Phil had ditched the spinners and caught his first river trout on a worm tripped down the bottom of the swim. I look forwards to seeing the photo.
We fished on together until 8.30pm but had no further luck. On the walk back downriver to the car it was interesting discussing tactics and flies, now we have all had the opportunity to see what works and what doesnt.
manchester fishing Irwell Ribble Trout