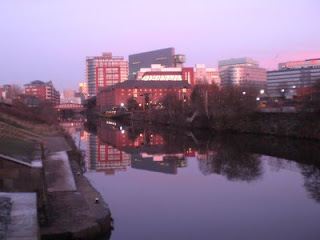 After a week of hard frosts, i wasn’t overly optimistic about my chances on the Irwell this afternoon. I chose to fish a city centre swim thinking that the roach might have shoaled up in the deeper water. The city centre has produced 60lb bags of roach during the past few winters for those brave enough (or daft enough) to negotiate the steep banks. The swim i chose was slightly downstream from Granada TV, where access was easier, and the banks level enough for me to be able to sit on my box.
The river was 10ft deep only a rod length out, and the swim shallowed towards the end of the run where a new canal lock has been built in preparation for the re-opening of the Manchester/Bury/Bolton canal system.
Using an pear shaped 1.5gr pole float with the bulk shot at about 8 feet and two droppers on a 0.08mm hooklength and a 22fine wire hook, i thought that i should at least get some bites from small stuff. I was wrong i got no bites at all for two hours.
As always, i pack up on reaching the two hour bite free limit, and as the sun was setting and temperature dropping i was glad to get back to the car and put the heater on. If i’d have had a few fish or at least the encouragement of a couple of bites, i would have fished on into the dark, as the larger roach feed most confidently in low light conditions and there are some crackers in this section of river (assuming that the cormorants haven’t eaten them all).
On reflection i think the only mistake i made today was in trying out a new swim, when the freezing conditions meant that the roach were probably tightly shoaled in slightly deeper water a few hundred yards upstream.