Having spent most of the last few months fishing venues all over the North West, I took the opportunity to return to my roots this evening. Throughout the winter, I found the usually prolific fishing in the city centre to be terrible, however during the recent spell of hot weather i saw some terrific shoals of roach and bream in the shallow water to the north of the city.
As its still close season for coarse fishing, I tackled up using fly gear, using dry fly tactics for the first time ever. There were fish rising everywhere, and from experience thought that these fish would be either trout, roach or chub. I started off in the ramp swim (pictured below) where the river funnels into a natural central channel followed by deeper water. 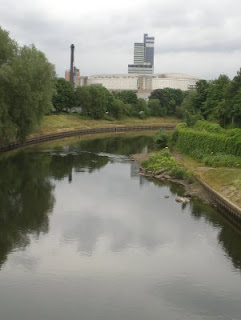 I’ve always fancied having a go at New Zealand tactics – where a small wet fly is suspended underneath a big bushy dry. My reasoning for using these tactics was that it gives you the best of both worlds.
With the wind blowing downstream it made presentation difficult so after about a dozen or so casts i switched banks and tried fishing upstream rather than down and across. First cast a small chub took the small black spider. 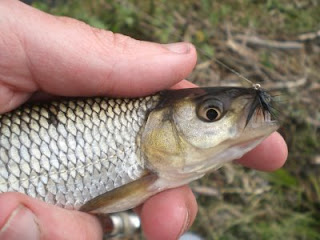 Catching this fish seemed to spook the others in the shallow water swim, so a move upstream became necessary. This move proved fortuitous because by moving to deeper water further upstream I found a nice bit of deeper water sheltered from the wind where the fish were rising freely, and went on to take a few more chub and a nice roach on all a klinkhammer. 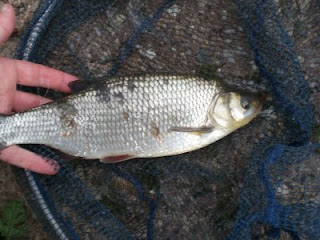 There is very little weed this low down in the river, and this roach looks as though it has really been in the wars during spawning on the rocky bottom of the river.

The fish were rising to the fly every cast but hitting the bites was virtually impossible – by their speed i would have guessed that these fish were roach but am really only guessing. Roll on the 16th!
manchester fishing Irwell Ribble Trout