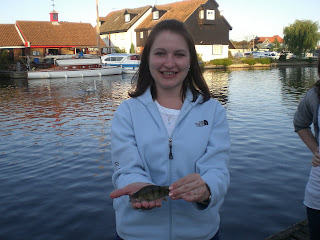 When someone suggested a family holiday on the Norfolk Broads – i had to pinch myself to check that i wasn’t dreaming. An anglers delight.
Oh and when i say family holiday i don’t just mean Lucia, Matt and myself – all my brothers, sisters and their families, together with some of my cousins and their families, Lucias sister and her boyfriend all descended on Peninsular cottages in Wroxham for a week to celebrate my mothers 70th birthday.
I had promised Lucia that i would spend quality family time with her and Matthew – so trips on the river Bure and to the seaside were standard fayre each day – but every evening i got the fishing gear out for an airing.
I only brought basic tackle which the kids could use, (drop, stand on, etc) so rather than using an elasticated pole I only brought a couple of old 7m whips and a float rod and an old tip rod. 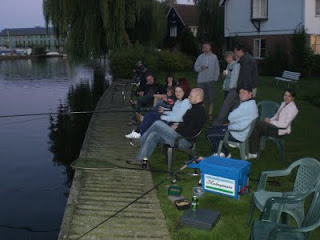 It was good fun teaching the kids to fish and there were plenty of obliging roach and perch.
Even some of the adults had a go – but non were as successful as my nephew Frank who seems like a natural. 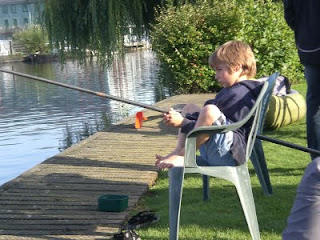 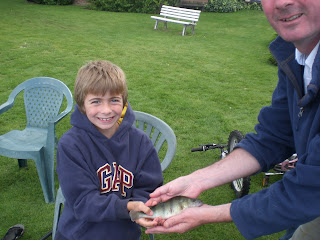 During the week we caught roach, perch, skimmers eels and pike fishing outside the cottages we had rented. One quiet afternoon i got my tip rod out and set up using a ground bait feeder. I caught only a few small Roach, but lost at least 5 fish when either the hooklength snapped near the hook or it was bitten through by a fish. I struck into these wrap around bites and felt good fish on, but after no more than a few seconds lost them. This continued despite stepping up the hooklengths to 5.5lb (0.19). Maybe it was Jack Pike taking the maggots or eels i don’t know – but as my own personal fishing time was short – i found it frustrating not to be able to carry on fishing to find out what they were. I also lost a great fish in the boat basin outside my cottage on the last day of the holiday (when i used micro pellet as feed and double maggot on the hook- i suspect that it was a big tench). 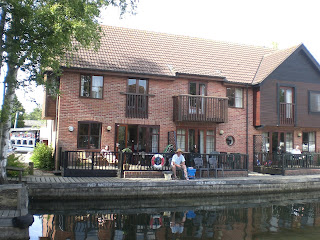 The week flew by far too quickly – my first visit to Norfolk – definitely not my last.
As you can see from this photo above – my accommodation for the week was an anglers dream. I would love to go back one day for a weeks fishing with the guys and really investigate properly the great fishing that this region offers. I shall add the pike photos once i find out who took them.
If any ones interested here’s the link to the cottages. http://www.peninsulacottages.com/
manchester fishing Irwell Ribble Trout