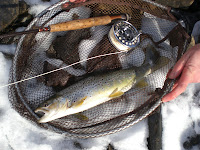 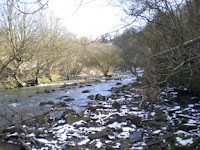 Went fishing today with Tony (http://www.timebytheriver.blogspot.com/). This trip had been arranged for a couple of days so it was a big disappointment to see two inches of snow on the ground when i woke up. We decided to carry on regardless and found when we arrived that the river we had chosen was only slightly coloured and not too high.

We fished the swim near the car park for the first hour, and Tony showed me a couple of his techniques with nymphs.

I was standing behind him watching his techniques, cast -mend -draw-run through, when he said “ah thats perfect” no sooner than the words left his mouth did he tighten into a lovely fish of about a pound. Talk about perfect timing, it made us both laugh. If only it were that easy to talk the fish onto the bank every time!

Later,we decided to search through some of the swims higher up the river, and this led to some serious mountaineering along the steep river banks. It certainly stopped us from feeling the cold!

We fished a couple more swims but neither of us had any success. Despite the cold there were some small hatches of duns and a fish rising in one of the pools we fished.

As the afternoon drew on the melt water turned the river a much dirtier colour than when we arrived and the water had risen a good 12 inches.

It was a great afternoon, and i learnt a lot from Tony about fly fishing on a small river. I cant wait for the water to return to normal as now that the evenings are becoming lighter, i can come fishing here after work.

I used a team of two with a march brown on point and a black spider type thingy as the dropper.
Tonys fish came on the point to a gold headed march brown. This new lexicon of snipe, spider, nymph, buzzer,emerger is going to take some getting used to, but after the fun i had this afternoon it looks like its going to be something i am going to enjoy 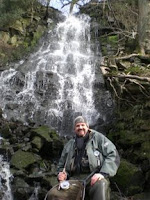 As we walked along the river bank we passed many waterfalls cascading down the steep cliffs that guard one of the river banks. I have never noticed these beautiful falls before, probably due to the fact that i have previously only fished this stretch in summer when the water table is lower and the cliffs are cloaked in denser foliage. Despite my lack of a fish today i still had a great day. 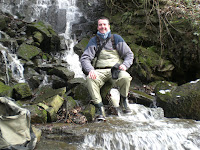