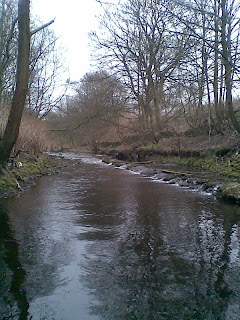 As its still early in the season and the trees are still bare, I took the opportunity to go trout fishing on a river that gets so overgrown in summer that fly fishing is virtually impossible. My previous visits to this length of water have always been productive, and despite its diminutive size, I’ve always been able to find the odd fish tucked away in its deeper runs and overhanging banks.
I was accompanied by Pete, a friend of Big Dave – despite being an accomplished still water fly fisherman – hasn’t that much experience of moving water. Talk about the blind leading the blind!
As we were tackling up we could see fish rising to flies which were hatching off the river. My attendance at Bolton Fly Tying Club is now paying dividends as i could proudly tell Pete that they were LDO’s (Large Dark Olives) but when he asked which fly should he use to catch them my limited knowledge became evident as i had to tell him i hadn’t a clue.
So it was a case of stick something bushy on that wont sink and lets hope for the best – anyway the best didn’t happen and we frightened the fish to death with our clumsy wading and crappy casting.
I did enjoy watching the LDO’s hatch, its amazing how quickly once they emerge from their pupa stage at the surface of the river, and how quickly they get airborne. These trout must be quick if they want to get a meal.
Undeterred by our lack of success, Pete and I tied on a couple of bugs and made our way upstream. The lack of rainfall in the North West is reflected in the very low water levels found in the river. Many of the pools were very shallow, and some of the runs i fished last year are high and dry. Its a real contrast to this time last year when it wouldn’t stop raining and the rivers were close to bursting their banks. 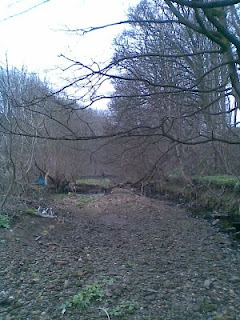 I caught fish from this run last year, its now as dry as a bone!

It was nice to walk up this river corridor which goes through a town centre, even though we could hear traffic noise we didn’t see another soul all afternoon. We did get to see how these little green oasis provide homes for an amazing variety of wildlife, i got to within 5 feet of a long tailed tit which amazed me with its soft pink plumage. 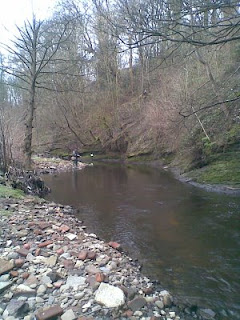 Its a pity the fishing wasn’t so amazing, a combination of our clumsy wading, poor presentation and very low water made fishing inevitably difficult. I managed to hook and lose a small trout in some fast water and Pete managed to rise another small fish to a dry but that was the sum total of action for the afternoon.
manchester fishing Irwell Ribble Trout