Due to various domestic commitments my only opportunity go fishing on Saturday was by getting up at the crack of dawn and fishing til mid morning. So after discovering the delights of Deep Pit last week it was an easy decision to make a return visit.
Choosing a different swim from my previous visit, I fed micro pellets at the bottom of the near side shelf. The strong gusting wind made holding the pole steady difficult even at only 6metres. I fed a couple of pots of pellets whilst setting up, and gave the fish a chance to find the feed before putting in.
Plumbed up and fishing an inch above the deck, I had a lovely tench of about 2lbs first put in. It really gave me the run around on No4 elastic. I caught loads of tench and crucians, with much shorter gaps between catching. This improved catch rate I put down to having put more thought into the way i was feeding the swim. Rather than a pot of feed every now and again, I made the decision to feed every put in, no matter whether I had a bite or not, but fed a reduced amount. It seemed to work, as the regularity of catching showed that I wasn’t overfeeding, and that the fish were actively searching for bait. I had left my hemp in the boot of the car, and this stopped me from catching any roach. 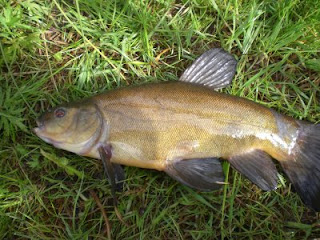 A few other anglers had also made the effort to make an early start, and they were having mixed success. 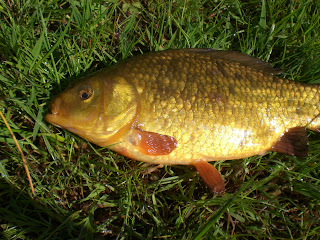 However after a couple of hours fishing a guy decided to come and fish less than 10 yards away from me. I couldn’t really complain as the pegs this lake are quite tight, but seeing as though its a good sized lake and there were less than 6 people fishing, i was a little miffed. I thought about having a moan at him, but as I was going to be packing up in an hour or two I let it be. BIG MISTAKE!
He promptly fired in half a dozen pouch fulls of pellets over a large area of his swim, This had the effect of giving the fish a large area in which to search for food, and all of a sudden bites were hard to come by. So after a bite less half hour, I decided to call it day. I must had caught a good 20 fish so I was really satisfied at the results i got in this short session. The fish were crackers and the tench fight like stink on light elastic.
manchester fishing Irwell Ribble Trout