Its been a week or two since my last post – I’ve been busy – fishing and working, so be prepared – this post is a long one.
A week last Saturday, Matthew and I had a few hours free in the City Centre of Manchester when we dropped Lucia off to do a bit of shopping. We parked the car for our two hours free parking in the Toys R Us car park and completed a little loop of the Aston and Rochdale Canals plugging for Pike.
Matt had action on his first cast, catching a greedy little perch on a long silver minnow type plug. I had to wait for my fish until the last 15 minutes of our little trip, when a 2lb jack took my Big S lure close to the near bank at the end of my retrieve. This is an area of canal that I have never fished before, but i know it holds a good head of fish, including double figure pike, and some large chub! Its free fishing, the only cost being parking if you want to fish for longer than two hours. There is a carpark next to the canal basin beside Piccadilly Station, you could fish from your car if you wanted to at this point and enjoy some good sport. 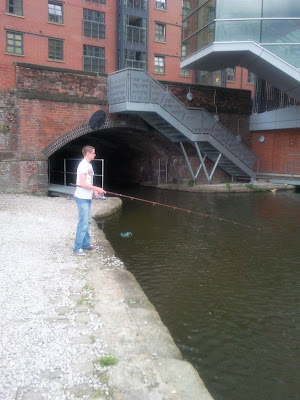 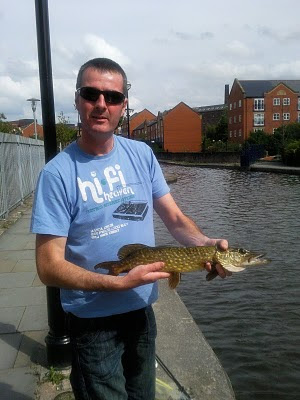 The following Tuesday saw me offer The Housekeeper a lift to work in Leeds. This of course meant that I had stashed a rod in the boot of the car, with a view to checking out some new water on the River Wharfe near Pool. With about a mile of river to explore, I wasn’t going to be able to fish all the available swims in the few hours i had available, but using maggot, stick and pin I managed to winkle out a few nice grayling and a couple of small brownies. I managed to lose a cracking grayling which caught me by surprise as it took the bait withing 3 feet of where i was standing. The greedy so and so had positioned itself in the river to intercept the maggots leaking from my bait apron rather than the spot i was trying to feed by hand. That will teach me ! 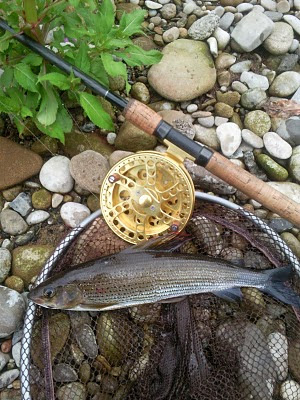 Friday afternoon, i had arranged to meet a young lad from one of the fishing forums i contribute to. He wanted me to show him how to catch a few fish from Maceys in Bury – but when push came to shove – he didnt show up.
So i tackled up in peg 29 which is in my view the best swim on the lake, and using a method feeder and 8mm pellet managed to catch about a dozen carp in the few hours I was there. I thought I was doing really well during my first hour, then one of the regulars came along and asked me why i was using a groundbait method feeder rather than a compressed pellet feeder? He proceeded to give me a lesson using pellet method, in that whilst both caught about the same number of fish, his were on average double the size of the ones i was getting. You live and learn hey! 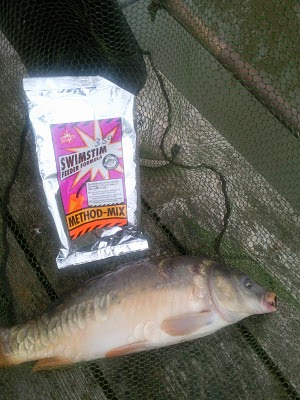 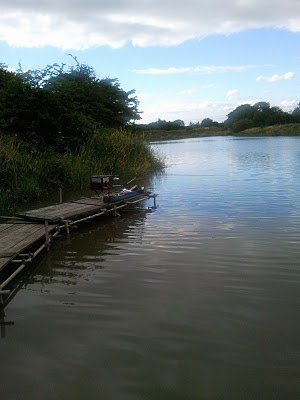 Sunday afternoon saw me back on the Ribble, but I started off in a new area downstream of the Tickled Trout. I had walked this section on a family walk the previous day, and identified a lovely tongue of water which i reckoned would hold a few fish. I wasnt disappointed by my choice of swim and caught a dace or chub every second run through with the float. Best dace about 6oz, best chub about 4lb8oz. 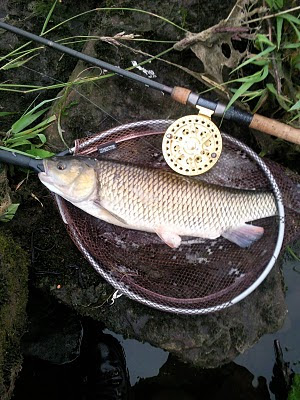 Later in the afternoon we moved up river past Ribchester to a favourite stretch of river, but heavy showers in the Ribble Valley led to a rapidly rising river and more difficult trotting conditions. I reckon the river rose about a foot for every hour we were there.
I did manage a few more dace and another nice chub. Phil K took a nice little silver sea trout – another one to add to his list. We were all hoping to catch a barbel or two on stick float gear but surprisingly none showed despite the ideal barbel conditions.
Spurred on by being last in this years List – I decided to play a little midweek catch up by visiting Square Lodge in Hindley for an hour or two on Wednesday evening. Using a margin pole, soft green pellets over micros Square Lodge didn’t disappoint and I caught some lovely crucians, the largest going to about 1lb8oz. A heavy storm, thunder and lightning had me putting down my carbon lightning conductor for about an hour, and sheltering under a leaking umbrella. The storm seemed to be the kiss of death on the fishing, as once it had passed over, i couldn’t buy a bite so i packed up early and went home with a nice bottle of red. 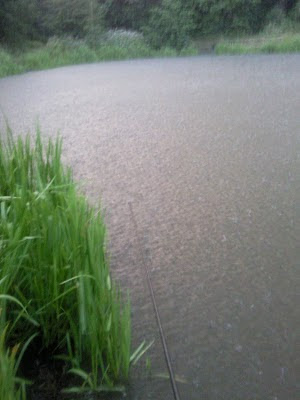 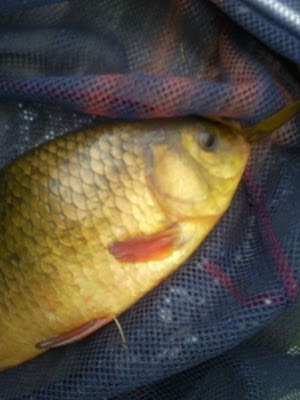 Last Saturday saw me dropping Lucia off in town for a couple of hours shopping. So i did the natural thing and headed off to the Bridgewater Canal for an hour or twos plugging for pike. This time i hit the other side of town, and parked my car next to the Throstles Nest Bridge near Old Trafford. From here i worked my way back towards Castlefield. The pike proved to be elusive, however small perch were regularly following my lure back to the bank, so i changed to a smaller lure and immediately started catching perch between 2 and 8ozs. 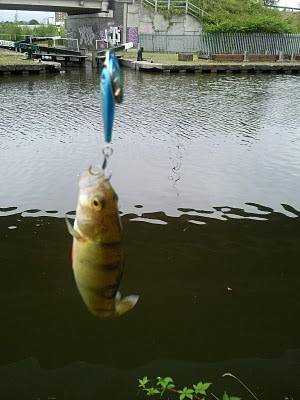 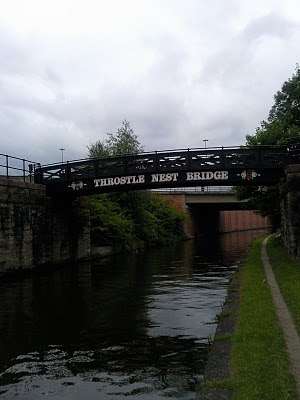 I cleared out my tackle shed on Saturday evening, and realised that i had about 3 cardboard boxes full of half used bags of pellets, some of them over 3 years old. Rather than chucking them away i decided that I will used them all up over the next month or two, and at the same time knock off a few more species from The List. So on Sunday afternoon i had a few hours at Beacon View fisher near Standish.
There was a match taking place when i arrived, so i set up in the corner peg just past the owners house.
I set up a sleeper rod with a hair rigged 12mm halibut pellet tight into the corner marginal rushes and then a second pole line at 6m in about 5ft of water fishing soft green pellet over micros.
I started off catching roach and skimmers on the pole, until after about 30 minutes the baitrunner on my sleeper rod screeched into life, and i caught a very lively mirror carp of between 3 – 5 lbs.
Whilst i was re-baiting the sleeper rod swim, i had left my pole in the marginal rushed with the hookbait up in the water. I just managed to grab the end of the pole as a white koi of about 5lbs dragged my pole into the water.
After this i managed a couple more roach and a brown goldfish (another one off the list). 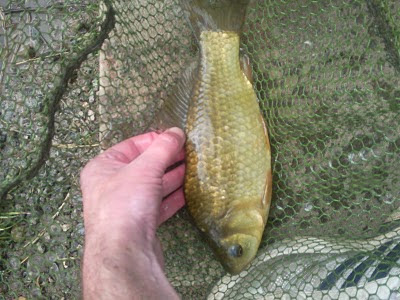 I noticed fish swirling out in the middle of the lake, so i pulled in both lines, and re-setup with a pellet waggler.
I was then lucky enough to have a golden hour and a half, when i caught a carp every other cast. This only stopped when i ran out of 4mm feed pellets and had to start firing in micros. This either put the fish off, or made them feed on the bottom, because the bites immediately dried up. I wasn’t bothered i must have had nearly 50lb of carp in an hour and a half and my arm was aching. Great fun, only spoiled by the large numbers of rats scuttling about in the margins. I washed my hands under the farm tap before driving home. I really don’t like fishing in rat infested waters – its a pity that i wont be going back there until i hear its been cleaned up a little.
So with 5 months of the year left, I’ve caught 20 species of fish. My best ever tally is 24. I think if i put my mind to it i will break the 30 barrier this season – then i can give up on this stupidly addictive chase. My other friends have been out catching big barbel, chub from the Irwell, and yesterday i heard that Karl has taken a 2lb7oz roach from the Ribble – now thats a fish!
manchester fishing Irwell Ribble Trout