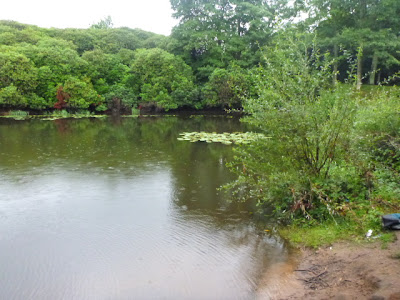 I often travel far and wide to go fishing – but yesterday evening I made my first ever visit to a lake which is less than two miles from my front door. A lake I’ve always heard people speak about, but one which I’ve always avoided as I’ve percieved it to be a trouble magnet.
However, a phone call from a friend who was reporting the capture of a dozen+ bitterling in less than an hour resulted in an instantaneous re-evaluation of the lakes potential.
So armed with half a pint of pinkies, some gossamer hooklength and size 22 hooks I sat on the lakes rubbish tip banks in the hope of catching my first bitterling in over 25 years.
A couple of small roach, then nothing for ages. So i mixed up some groundbait and threw in a few balls of slop. The float buried and my threes elastic pinged out to the max as a small tench made a successful bid for freedom.
Now i dont like losing hooklengths to fish, and if I’m going to try for mini species then I dont want to get smashed up all the time by their larger bretheren. So I swapped top kits to an 8 elastic and upped my hooklength from 0.08mm to 0.11mm.
A few more roach from the margins but no bitterling. Then again the float dipped, and my elastic stretched out. And again pinged back as another tench or carp smashed me up.
Its funny how when you want to catch a biggun all you get is tiddlers and vice versa!

As it was getting dark – (and very wet) I decided to call it a night – but now I know they’re there – I’ll be back!