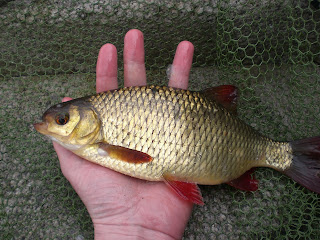 I made yet another visit to Salford Quays this weekend. So far there seem to be far fewer fish making their way into the shallower basins this year, no doubt the flocks of cormorants which live in this area are the cause of this.

The gin clear water of the quays make fish spotting easy, and after a quick wander around i could see quite a few small pike waiting for the annual silver fish spawning migration through the interconnecting canals, and some nice tench beautifully silhouetted against the light green algae of the basins floors.
I was hoping to catch some of the lovely roach and rudd which cruise the mid water of one of the deeper basins, and with the aid of polaroid glasses I quickly located a shoal of fish which contained some lovely specimens of both species.
The tackle I used was a loaded waggler, locked with two number 6 shot, with a number 8 and number 12 dropper. The water I was fishing in was about 20ft deep so I set my rig at 15ft hoping to get through the smaller fish in the upper layers and catch some of the larger specimens which tend to stay in the depths.
As the water is gin clear the fish are easily spooked ,the use of a very light 0.06 hooklength and a fine wire size 22 hook is necessary in order to even have the hope of a bite.
The clarity of the water is incredible at the quays and with the use of polaroids its easy to cast 15 yards and then watch your bait sink all the way down into the depths. The float is purely a means of casting your bait out the required distance, as even fishing at a depth of 15 ft you can actually see the fish approaching ( and the ignoring) your bait. White maggots are visible virtually down to the lake bed so when the tiny little dot of white disappears its time to strike.
After catching a few nice fish in the first half dozen casts the shoal is easily spooked and become far more careful as to which baits they will take.
All loose feed is immediately consumed, but any bait which contains a hook is studiously ignored. I tried to overcome this by burying the hook inside the bait, but the fish were not as daft as I hoped. Maybe the use of a coloured hook might make a difference, and next time I will try out a few different patterns to see if they make a difference.
Whilst seeing fish swim up to your hookbait, and then shear away at the last moment is frustrating, at least I could see it happening, and therefore think about a different plan of attack for the next time. The anticipation of watching a specimen rudd swim towards my bait was fantastic, just a pity they were picky rather than ravenously hungry.
Its interesting watching the fishes reaction (mostly disdain) to a baited hook amongst loose feed its amazing how some fish can detect the hook even when the most gossamer tackle is being used. I experienced something similar on a little stream earlier this year and still haven’t figured out the answer.
Later in the day, Tony came down for an hour with his young lad. I got my pike gear out of the car, and put on a perch dead bait suspended under a bung. 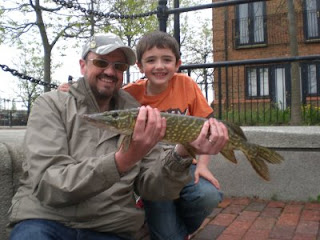 It took about 10 minutes before one of the small pike obliged him with a birthday treat. Happy Birthday young fisherman 🙂
manchester fishing Irwell Ribble Trout