A combination of soon to arrive visitors from overseas and a family holiday will mean that I wont get the opportunity to get out fishing for the rest of July. I’m looking forwards to spending some family time – honest!
Anyway in light of this time away from my rods i decided to get in as much fishing as possible over the last few days – so i apologise in advance for the length of this post.
Friday Evening On The Irwell In the City Centre. 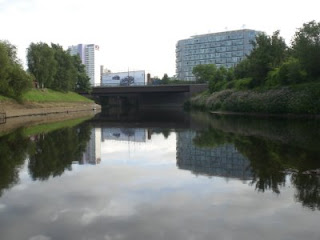 I fished one of the swims near the old Boddingtons Brewery (above) using stick float and maggots. All i could catch was small chublets and the occasional roach. As dusk fell i moved upstream to find some deeper water and was rewarded by catching this 2lbish chub. 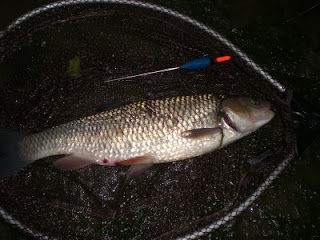 This far downstream the Irwell is nothing but a glorified storm drain, with the banks being managed by the local authorities to prevent any chance of flooding the surrounding flood plain. This takes away the chance for traditional riverbank and river bed features such as concave or convex banks, trees etc. however there are still the foundations of old riverside buildings still to be found in the river channel, and it was by wading out on this old foundations that i managed to find fish holding features.

It was an enjoyable evening with the usual the usual fish a chuck – despite the less than salubrious surroundings I really enjoy fishing this area of river.

Saturday Morning – A Walk With Pete, Tony and Ian from the EA.
Saturday morning was spent walking the banks of one of our local streams with the guys and Ian the EA officer whos remit is the Irwell Basin. It was Pete and Tonys intention to show a particular length of river to Ian from the EA and to look into the possibility of making habitat improvements. I find spending time with Pete really interesting as he is very keen on the scientific side of our sport and has an encyclopedic knowledge of the plants and bugs which live in the river.
It was a great shame that there had been alot of overnight rain which had put 6 inches and alot of colour on the shallow river making fish spotting impossible. Pete put his case across really well to the EA who agreed with him regarding the improvements which could be made to the river.
It was interesting listening to Ians viewpoints on river pollution – especially the effects of long term low level run offs from wrongly plumbed domestic appliances. His stance on the recent pollution incidents on the Irk and Upper Irwell are also re-assuring. Its good to know that an EA officer who is also a passionate angler is in charge of my local patch of river.
Saturday Afternoon In Search Of Silver Bream 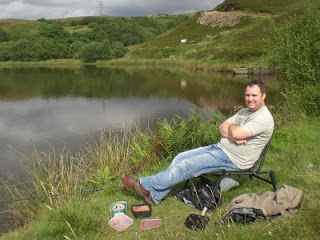 After leaving Tony and Pete, I picked up Phil and took him to a fish an old mill lodge up in the Lancashire hills which is reputed to hold Silver Bream. Catching one of these has started to become a mini obsession (another one to add to the list). The lake is well off the beaten track and quite exposed due to its lack of surrounding cover. I’ve fished this lake once before, and reached my two hour limit without a bite – and therefore packed up having blanked. That time I fished maggot waggler, this time Phil and I both tried using feeder and tip tactics. Yet again the two hour biteless limit passed so we both blanked.
To salvage our pride we headed off back down the M66 and had the last few hours of the day at Maceys in Bury.
We both used feeder tactics – Phil finding a shoal of small stillwater barbel – and i caught a mixture of roach, skimmers. Some bright spark had the idea that the Barbel would be happier in the River Roch rather than in a muddy carp hole – it wont be me but i sincerely hope that someone transfers a few the hundred yards or so to the river. 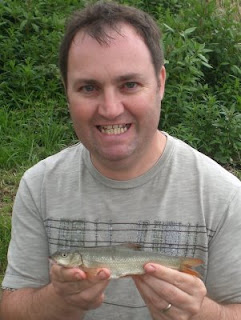 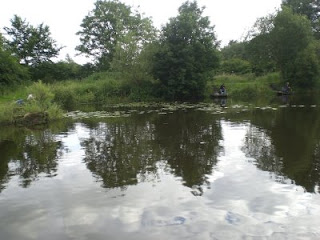 Heavy overnight rain on Saturday left our local river high and unfishable using our usual light trotting gear. I could see Tony wince when I suggested we visit a local commercial fishery to target stocky carp.
To his credit, Tony knew of a local commercial fishery which was a cut above the usual muddy carp hole, and we spent an enjoyable evening catching roach and carp in a lovely lake surrounded by mature trees and covered in water lilies. It wasnt hard to catch using a margin pole and maggots. 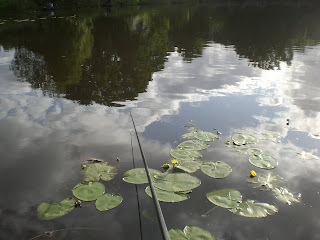 Monday At Borwick Fishery Near Carnforth
Phil and I had originally planned to go to and fish either a tarn in the Lake District or Cow Green Reservoir for wild brownies on the fly – however the recent unsettled weather was forecast to continue with heavy showers predicted throughout the day. Rather than being soaked to the skin up in the hills, we decided to wimp out and fish a commercial where we could retreat gnome like under our brollys when the inevitable rain arrived.
Phil was keen on visiting Borwick Fishery near Carnforth, as they have 8 lakes each stocked with different varieties of fish. We chose to fish Fingals Lake which was stocked with Ide and Carp.
Again we both started out on feeder tactics – immediately getting a bream a chuck averaging just over a pound. Phil stayed on the feeder all day long, and in addition to the regular bream he also caught some nice Ide and the occasional carp. 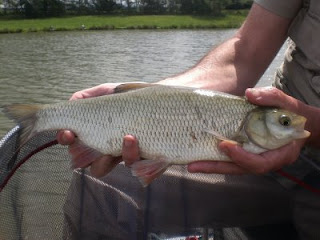 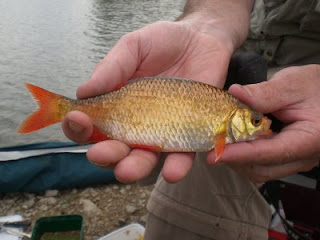 I mixed things up a little by going on the pole at 6metres, but found it difficult to avoid small, but beautifully marked Rudd.
I also caught Ide and Carp. The rain showers intensified throughout the day, and at times i was hanging on to my brolly to prevent it from taking off. The last of these turned into a downpour of biblical proportions and we packed up in driving rain, and thunder claps. 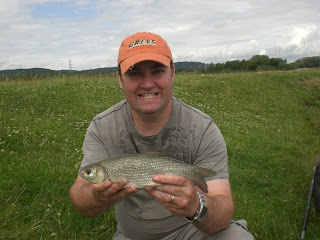 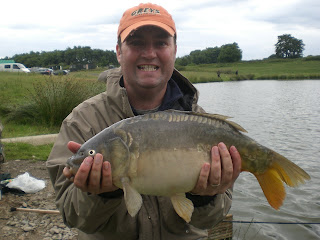 Was a good day despite the weather.
I’m now on best behaviour for the rest of the month and my fishing gear has been cleaned and put away until August.
manchester fishing Irwell Ribble Trout