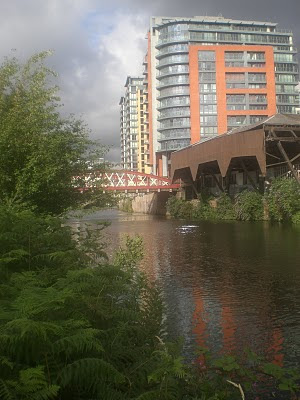 Saturday afternoon Lucia asked me to drop her off in Manchester city centre so she could fulfill her female urges to shop. Rather than trail my lady wife around various ladies clothing emporiums i bid her adieu and took a 5 minute spin around the inner ring road and ended up in the car park of the casino on Regent Rd (another city centre free parking spot).
I got a few funny looks whilst tackling up from the McDonald and KFC munchers, and then headed off down the zig zag path which leads directly to the river near to the old Harry Ramsdens chip shop.
I started off using a size 2 copper meps and had a few follows from some small perch, but no follows from any pike, so I switched my lures around a bit hoping to find a pattern that might attract some interest. The Big S, the Silver Minnow, the Jointed Plug all had a swim but nothing doing. It was only when I swapped over to a blue and silver Vibrax Minnow that I started to see some action.
I’d had a couple of casts in every swim down from the Campanile Hotel to the V&A Hotel without any fishy interest (other than the suicidal small perch) and then a chub of about a pound took an interest and put a bend in the rod. The river was a little dirty (ha ha its the Irwell were talking about here – its like fishing on 3 miles island!) so it wasn’t until the final moments at the net that i realised i had caught my first ever chub on a lure. 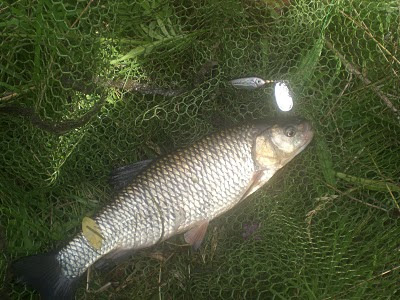 After the V&A the riverbank pathway narrows to only a couple of feet wide, with quite a steep drop into the river – so care is needed if you decide to venture down this way. Once at the VAT offices theres plenty of room again, even a couple of benches for a nice sit down. It was from outside the VAT offices that i caught 5 perch between 4 and 8 ozs in a dozen or so casts.
The VAT offices is the upstream limit for easily accessible fishing in the city centre, upstream of this point, mountaineering skills/ladders and waders are a necessity.
So a chub and half a dozen little perch wasnt a shabby return for two hours on the river.
I like these little Vibrax Minnows, having used them recently on the Bridgewater Canal and now on the river. They cast well, the spinning blade deflects the lure away from snags, and they attract other species as well as Pike.
Sunday saw me returning to the Ribble to fish the swim where I’ve recently had so good sport. The river was up about 18 inches, and the force of water over the previously shallow gravel run was nearly strong enough to take my legs away from under me. Rather than risk my neck, I decided to fish the near bank crease which had formed, and for two hours i caught a succession of small roach, dace and chub using maggots and caster. I was really enjoying myself tiddler bashing, until Tony gave me a call to enquire about river conditions – his immediate reaction was to suggest joining Pete on The Dane. Hmmmmm
So a nano second later, I started to pack up and head off for an hour down the M6 as Pete had told us that the Dane was only an inch or two above summer levels. Within the hour I was battling through the Balsam and I started to catch small roach and dace again from what is a noted barbel swim – sounds familiar! I started to swim hop downstream until I came to Phil and Tonys favourite grayling run. I only fished to top end of the run for 15 minutes, but still managed to catch 3 nice fish. However, Tony was itching to catch something a little bigger, so we again set off through the jungle of balsam to a very snaggy swim which the chub and barbel favour due to the cover it gives them.
We both quite alot of maggots to use up so we fed the swim quite heavily to encourage the fish out from under the overhanging tree branches and bankside roots into the clear run in the centre of the river. A few small dace were caught, then Tonys float buried, and the swim erupted as the long broad bronze flanks of a decent fish made a dash for the overhanging willows. The result Fish 1 Tony 0.
As the swim was so narrow, we took it in turns to run our floats through, again a few more dace, and then Tony managed to catch a lovely chub of about 4lbs. It wasn’t long before I had a fish of similar proportions. I had been concerned that we wouldn’t be able to land any decent sized fish in such a parrot cage of a swim, but the chub as so often is the case gave themselves up after a couple of strong runs.
The light faded all too soon, and we didn’t manage any barbel.
manchester fishing Irwell Ribble Trout