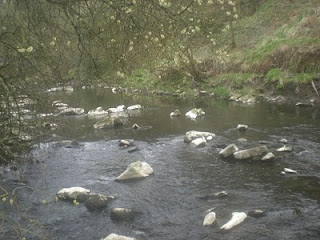 What a pleasure it was to pull up in the car park, adjacent to one of my favourite trout fishing swims and see a HUGE lunker of a trout gently sipping flies off the surface.
I havent seen any decent fish for ages on the river, and have been very worried that they had been fished out or wiped out by some form of pollution. This fish was well over the 3lb mark, and it was a pleasure to watch it moving from side to side in the current having its Sunday dinner.
I’ve had a few good fish over the years from this river, so rather than sneaking up behind it and casting a line, I left it in situ for Tony who was driving up the motorway to join me.
The river was low and clear, and maybe this clarity and the early season lack of bankside cover resulted in the fish spooking as soon as Tony approached.
It was very disappointing to see two points of sewage pollution entering the river. Its things like this which left unreported have a cumulative long term effect on the river. I’ve reported them both to the EA pollution hotline.
Despite flogging the water for a good hour or so I didnt do much in the standard pools which used to produce so many fish. So moving upriver I caught a little brownie (my first of the season) from a pool below a little waterfall. It seems as though the fish have deserted the deeper runs and moved into the bouldery pocket water which gives more cover and a chance to escape from predators. 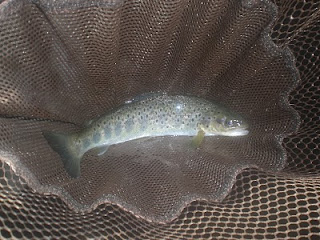 I then spent 20 minute turning stones in the river to see what sort of bug life was around, and was reassured to see huge numbers of creepy crawlies such as stone clinger nymphs, caddis larvae and baetis nymphs – surely a sign that pollution hasnt been too severe over the winter months. This hunch was reinforced by my capture of these bullheads and even more surprisingly a nice big stoneloach. 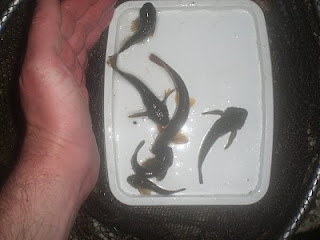 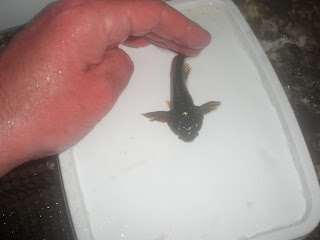 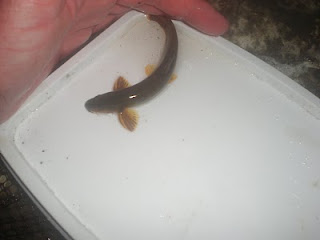 Tony also managed to take a micro – brownie, at least a 10th of the size of his original target fish. 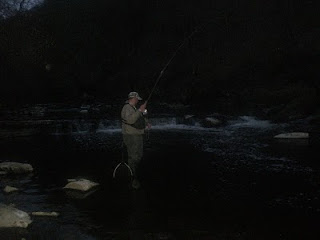 As always, it not always the catching of a big fish which gives pleasure, I got immense satisfaction from just being able to observe this magnificent creature in its natural environment. Those who are taking fish from our rivers are nothing but shortsighted, selfish and stupid.
manchester fishing Irwell Ribble Trout