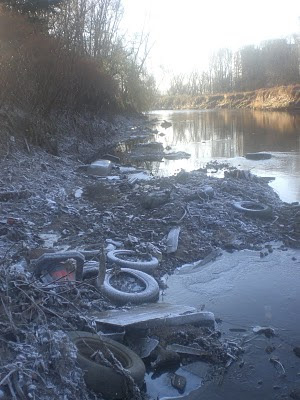 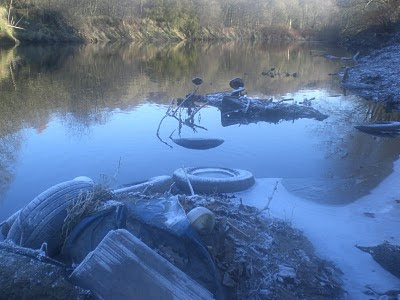 With the thermometer in the car nudging -5Celsius this morning, i cried off my pre-arranged trip up to the Ribble with Tony and Pete. I just couldn’t face wading knee deep in the freezing cold river water and having to constantly remove the ice from the top few rings of my rod.
So as all the local lakes had a two inch lid of ice it was an easy decision to have a wander along the Irwell in Lower Broughton to see if I could snaffle up a Pike or two on my lure gear.
A lovely bright crisp but oh so cold morning, at least lure fishing would keep me warm and on the move.
I’ve had most of my Pike on the Irwell using a standard cheap mepps style spinner with a red tag, for some reason they seem to consistently out-perform plugs and other styles of lures. After about 20 minutes I made my way to the foot of a faster tongue of water, and to be honest i wasn’t expecting to catch anything from this particular swim, but just as the lure was coming back in close to the bank, a decent fish rolled over the top of the lure, from its girth and creamy white belly I assumed it was a half decent pike, and re-cast short to see if it was still in the area.
Luckily for me, the fish decided to have a second bite at the cherry, and i was convinced by its plodding head shaking fight that i had a nice pike on the other end of the line.
Image the knee knocking moment I experienced when the fish rolled on the surface a second time and instead of seeing the greeny cream body of a pike, i saw the spotted flanks of a huge big brownie. Bloody hell – was i shaking when i knew what i had on!
The fish really used the faster tongue of current to its advantage, and i was obliged to follow it downstream a bit as there was no way i was going to be able to coax it back upstream to land it.
I kid you not, i my legs were turning to jelly as i landed it.
What a beauty – 26 inches long and bang on 7lb weighed on my digital scales. 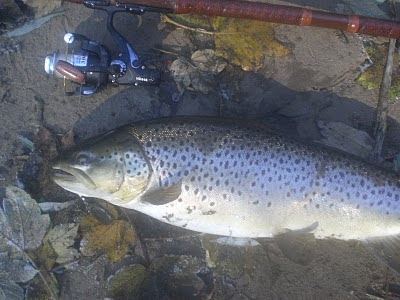 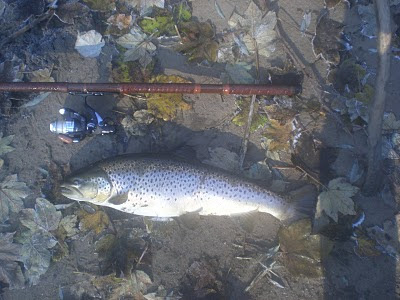 A quick pic and then I slipped it gently back into the river, where it sat still for only a couple of seconds before it was off.
I fished on for another hour or two, but didn’t have any more luck.
Who cares – I’m still shaking now as I write this up, well worth all the recent blanks.
manchester fishing Irwell Ribble Trout