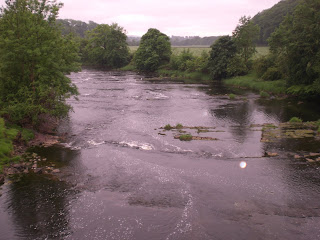 Had an afternoon/evening session on the Ribble with Tony and Phil, i was looking forwards to trying some more upstream nyphing.
Despite the rain that was falling, the river levels were low, a good two or three feet lower than on our last visit.
Tony and i started fishing the shallow pools below the bridge but all i could catch was weed. Tony however connected with a couple of fish but didnt land any of them until a nice brownie graced his net, caught from the last pool in the series beneath the bridge.
We then wandered down to Phil who was fishing a much deeper pool further down the beat, he too hadnt had any takes but as ever was enjoying his fishing.
Tony and i fished another couple of pools, trying to make sure we fished the streamier, faster moving, more oygenated inflows at the head of the pools. Again Tony had a couple of takes and i had none.
We have developed the habit of turning stones on the river bed to see what sort of invertebrate life we can find, as we are sure that these bugs must form 90% of any fishes diet. A good hatch of flies must be a trouts form of dessert after having a good meal of bugs.
Tony is quite an expert fly tyer, and the photo below shows a real hydropsyche larvae, and an imitation fly that Tony has made. I am hoping that Lucia gets me a tying vice for my birthday as Tony has promised to show me how its done. His flies are impressive and seem to catch far more fish than shop bought ones. 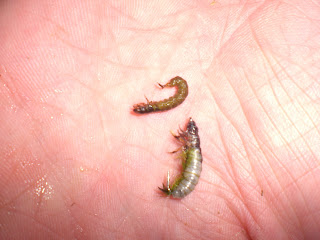 The last pool we tried was one where another river joined the Ribble, Phil had joined us by now and was pleased to report success further up the beat in the shape of a brownie and a grayling.
There were three fast streamy run intos into this pool, and we each fished one of these tongues of water. I had a take from a really good fish on only my second cast, but it shed the hook after about 10 seconds. As i hadnt had a take all afternoon i was gutted, and thought that my chance for the day had dissapeared with that fish. However a couple of casts later i hit into a nice fish which i landed. About 15 minutes later i took a second, both of which Lucia and I have had for breakfast this morning. These fish appeared to be ones that had been stocked and didnt have fully formed tail fins, also their markings and colouration didnt match those i have seen on truly wild Ribble trout, so it was a guilt free breakfast. I have never intentionally killed a wild trout and would never do so. 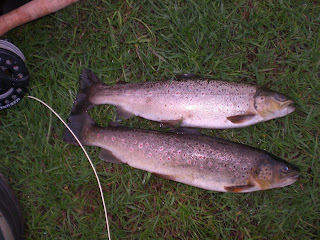 Both Phil and Tony caught trout and grayling from this pool, so it was three happy anglers who made their way back home. Topic of discussion was do we take a day off on the opening day of the coarse season (june15th) and go fishing- of course we do!
manchester fishing Irwell Ribble Trout